Movie Review: Let us now dump upon “The Emoji Movie” 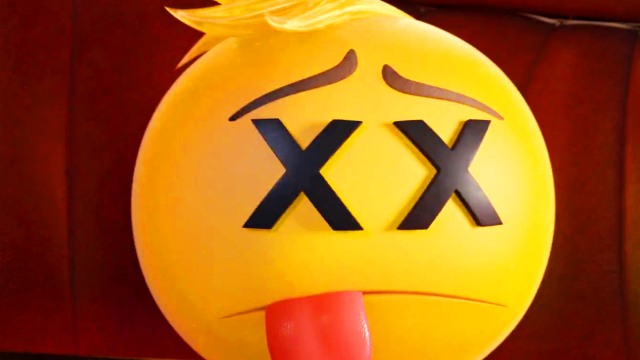 An animation braintrust put in the overtime, brainstorming brilliant bon mots, thinking outside the box and in dreaming up visuals to illustrate The Secret World of Cell Phones for “The Emoji Movie.”

Nah, not really. They just took “Wreck-It Ralph” and rolled its video gamescape over into cell phone apps, stickers, games and emojis.

But that cluster of screenwriters found barely a single laugh in this wayward tale of a “Meh” face emoji in search of reprogramming. Not a one.

Anna Faris voices an in-phone hacker named “Jailbreak,” and she gets to blurt out “Sweet MOTHERboard!”

The poop emoji (Patrick STEWART?!) gets picked on.

And Maya Rudolph, voicing the ever-gargling/always-flossing/compulsive tooth-brushing Smiley Face emoji, gets to do a couple of spit-takes.

But that’s all there is to this comatose cartoon for kids, aka “T.J. Miller’s ticket to oblivion.”

Gene the “Meh” emoji screws up his Source’s (a teenage boy) text flirtation with a cute girl in school. And that’s enough to get him erased, if the evil supervisor Smiley Face and her delete-bots have their way.

His “Meh” parents (Steven Wright and Jennifer Coolidge with nothing funny to say) can’t help him. “I’m so nervous I could SHRUG.”

Only the no-longer-a-favorite High Five emoji (James Corden, giving it his all) can sneak Gene out, into the phone’s nether regions and perhaps on into The Cloud.

So let’s dash through “Let’s Dance” and “Candy Crush,” fend off the abuse of Internet trolls (Jeffrey Ross voices one — perfect), the distractions of Youtube and the come-ons of SPAM, and find a way to get Gene his “Meh” back, or something resembling cell phone world Free Will before the balky phone is erased.

Must be a Samsung.

It’s not funny, and the fanciful world of Textopolis and environs here is not remotely as inventive as the one cooked up for “Inside/Out,” “Monsters, Inc.” or “Wreck-it Ralph.”

The script’s strained overview of web memes — hashtags,  kitten videos and “Bye, Felicia” — isn’t worth the 86 minutes the movie sucks out of your cell plan, your battery or your life.

1 Response to Movie Review: Let us now dump upon “The Emoji Movie”