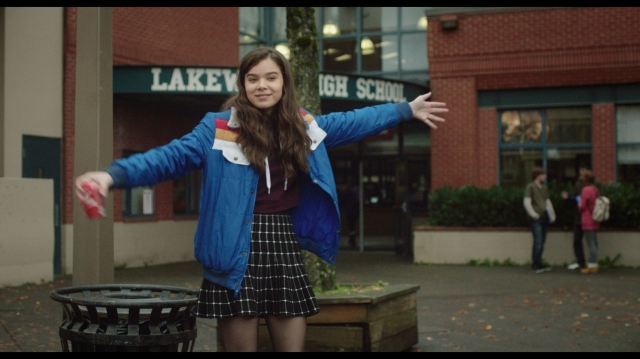 It’s an easy comparison, as “The Edge of Seventeen” was plainly inspired by the iconic ’80s teen comedy “Sixteen Candles.”

There’s a hapless, cute and ignored teenage girl, crushing on a guy who doesn’t know she exists. A scandalously-misplaced sexual communication puts her in an awkward spot. She’s anxious to grow up, to add romantic experiences to her life and her peers and the adults in her world aren’t any help.

Thirty-plus years since “Candles,” and the kids are more foul-mouthed,  more wired and have even easier access to alcohol and sex, although the movie high school is just as segregated.

But writer-director Kelly Fremon Craig improves on the old John Hughes formula in one important regard. She makes the adults just as funny, just as real and not the clueless bystanders of that “Breakfast Club” era.

“The Edge of Seventeen” may be a star vehicle for Hailee “True Grit” Steinfeld. But Woody Harrelson almost steals it from her, and Kyra Sedgwick adds a complicated, sympathetic ear to a self-absorbed kid screaming at the universe of of her life.

Steinfeld is the nerdily-named Nadine, square peg in the round holes of Lakewood High. She’s been that way since she started school. But for all those years, she’s had one true-blue friend, Krista (Haily Lu Richardson).

That relationship is shattered during an overnight booze bust at her house, when Krista hooks up with Nadine’s hunky, popular older brother Darien (Blake Jenner). Nadine’s world is ending, with nobody to talk her off the ledge and no friend to lead her out of the solitary depression she’s been in since her dad died.

All of this — or a lot of it — pours out in her confessional narration, and in venting tirades with Nadine’s long-suffering favorite teacher, Mr. Bruner — played with droll bemusement by Woody Harrelson. He’s the one she blurts her plans out to when she’s reached her limit.

“I don’t want to take up a ton of your time, but I’m going to kill myself! I just though an adult should know.”

Bruner’s eye-rolling dismissal tells us he’s heard this crap before and from this kid. But his sarcasm about the way she ruins his lunch period and his patience withstanding her insults about being tuned-out, phoning in his job, is hilarious. And he has a lot more scenes, every one of which add to the relationship and add laughs to the movie.

She brushes off the stumbling, fumbling attentions of Erwin, the nerdie Korean kid in her history class, played with great, offhanded charm and depth by Hayden Szeto. In “Sixteen Candles,” the token Asian was a hilarious over-the-top stereotype, so — PROGRESS!

And at the root of all her confusion and misery is a growing self-knowledge.

“I had the worst thought. I’ve gotta spend the rest of my life with me.”

Craig scripts characters, jokes and relationships with a sharp eye and ear. The way Nadine and her brother fight is no-holds-barred real, drunken threats about calling the cops with stories of incestuous abuse. Her emotional brawls with her widowed, lonely and needy mom (Sedgwick) have the sting of truth built in.

And Craig gets the stakes of life at 17, when a rejected “friend request” is the end of the world.

The leads get several spotlight scenes, with Jenner most impressive at delivering another important improvement that “Seventeen” has over “Sixteen.” He’s the one to point out what a self-absorbed, babbling/venting drip Nadine is.

Steinfeld has her best role since “True Grit,” and manages the long, ranting monologues with ease. All that talking lets Harrelson, mostly silent in their encounters save for a cryptic counter put-down to Nadine’s cracks about his commitment and his salary, win their sparring matches with just a sigh.

The film’s shortcomings stem from the nature of Hollywood, the sorts of people who get there and get to make their movies out of their vision of the world. Most high schools aren’t suburban islands of mono-racial affluence, though most Hollywood filmmakers grew up in such enclaves. Filmmakers of limited world experience write student filmmaker characters because that’s what they know. Filmmakers show their own insecurities about age by creating teen characters who are, as Nadine insists, “into old movies, old music,” validating the screenwriter’s tastes as “still hip.”

But “The Edge of Seventeen” is still the best teen comedy since the heyday of Hughes, raunchier and randier as befits the passing decades, but with kids just as mixed-up as ever, and over exactly the same things. Teen angst never goes away, it just deserves a witty updating every now and then.

MPAA Rating:R for sexual content, language and some drinking – all involving teens

Credits:Written and directed by  Kelly Fremon Craig. An STX release.