Remove yourself far enough from NASCAR country and you won’t have any trouble identifying “the greatest rivalry in the history of racing.”

That would be gigantic global car builder Ford vs. Italian bespoke racing works Ferrari, a rivalry that dominated the greatest auto endurance races of the 1960s — LeMans, the 24 Hours of Daytona, the Twelve Hours of Sebring.

“The 24 Hour War” is a somewhat jingoistic documentary about that celebrated and deadly dangerous feud, one that spilled over from the boardrooms and onto the world’s great race tracks for one all-the-marbles decade. Television director and producer Nate Adams and comic/car guy Adam Carolla, who gave us the terrific “Winning: The Racing Life of Paul Newman” re-team for this history lesson which, by the simple outcome of the rivalry, tends to play as a Ford Racing promotional film. 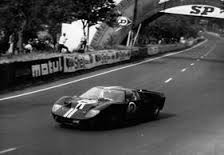 Conducting fresh interviews with the survivors of the era, the descendants of those who didn’t survive and lots and lots of archival footage of grunting, screaming sports cars, Carolla and Adams give us a quick overview of the history of the respective companies, an eye-opening blast of the dangers of that pre-“Safety First” era and the characters and intrigues of the battles that saw teams of Ferrari and Ford drivers struggle to sweep the other away in the most prestigious sports car races on Earth.

“Intrigues?” Let’s start with Ford’s decision to get back into racing after it and other American manufacturers had abandoned it after a string of deadly crashes in the 1950s, the deadliest coming at LeMans in 1955, when a driver and 83 spectators died in a single accident. Ford was about to take over Ferrari and own itself a prestige sports car marque, Enzo backed out and the Ford Family made it their business to get even by building the GT-40 and running the black dancing pony Ferraris off the track in the mid-60s.

The Ford-centric film (too much so, to be frank) is a celebration of American know-how and problem solving. Ford rounded up the very best and the brightest, in the garage and in the cockpit, and turned them loose on a problem, which they eventually solved.

Car-builder and speed guru Carroll Shelby and drivers Dan Gurney, Bob Bondurant, Mario Andretti, with Brits David Hobbs, Jackie Oliver and Brian Redmon swap stories, anecdotes and opinions — from both inside and outside the Ford circle — about the stakes, the schemes and the cost of this on-track “war.” Historians pipe in, providing more neutral perspective.

Racing footage from Daytona, Sebring and LeMans demonstrates just what all the talking heads are going on about — Ford’s efforts to make the GT-40 as durable (for a 24 hour race) as it was fast, Ferrari’s efforts to counter what Ford came up with as it started to dominate tracks in the mid-1960s. Particularly memorable — the deluge that saw cars plowing through lakes of water at Florida’s rough-hewn Sebring road course in 1965.

A clip of a GT-40 just sprinting away from a bright red Ferrari at Daytona in 1966, when Ford finally got Ferrari’s measure, tells us all we need to know. Or so you would think. Ferrari may have fallen by the wayside, but Ford’s GT-40 dominance wasn’t eternal, either, with the rise of Porsche and more recently Audi.

But no matter the results of recent races, “The 24 Hour War” is a bracing reminder of the days when drivers became legends, racecar teams were a big source of national pride and when Ford got out of the business of building “living rooms on wheels” and took its chances on “the Super Bowl of Speed” — LeMans.

Credits:Directed by Nate and Adam Carolla . A Chassy Media release.