Posted on November 1, 2016 by rogerinorlando 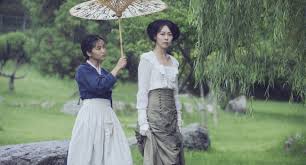 “Sex,” the infamously twisted Woody Allen once joked, “is the most fun you can have without laughing.”

And there’s sex — explicit, over-the-top coitus in all manner of couplings. The only word for it is the one that the con man “Count” of this Park Chan-Wook (“Oldboy”) period piece uses for his mark, the moody, disturbed and rich young woman he’s trying to hustle — “ripe.”

In the years just before World War II, Sook-hee (Tae-ri Kim) is packed off to be handmaiden to a rich Japanese women living with her uncle in occupied Korea. Sook-yee has been recruited by “The Count” (Ha Jung-woo) to assist him in his latest caper — seducing the wealthy Lady Hideko (Kim Min-hee) out from under the nose of her covetous, perverse uncle (Jo Jin-woong).

Sook-hee will become Tamako, handmaiden, with recommendations, for Lady Hideko in the vast British/Japanese mansion her uncle keeps her and his vast book collection in. Hideko is fragile, given to nightmares involving the cherry tree her uncle planted out back, the one her aunt was found hanging from. Tamako narrates “Part One” of the story, vowing to “make my fortune and flee this country.” But she takes pity on hearing Hideko’s nightmares, sings to her, crawls into bed and comforts her.

And that’s when she starts to fall for her. 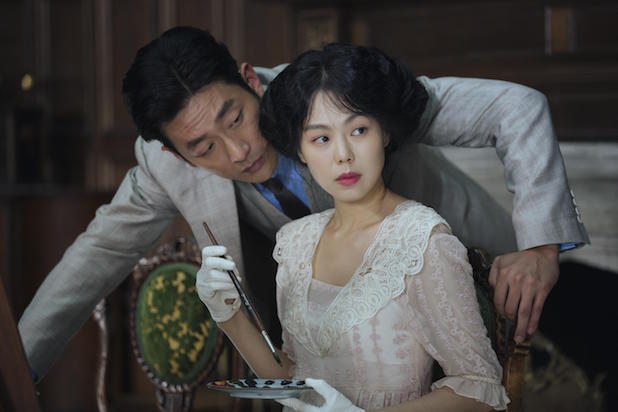 Tamako/Sook-hee doesn’t let her sympathy deter her from her task — at first. She aids the Count’s courtship even as she pities Hideko’s fate — a quick marriage, a quicker trip into an asylum.

But plans and alliances change, and Park summons up delicious surprises in between long, overheated sexual encounters, “bells of passion” and primitive wooden sex-doll demonstrations and the like.

The stakes are dire, with poison pills present should any of those involved want to avoid a trip to the uncle’s “basement,” where unspeakable things are said to happen. He wants Hideko and her money for himself, the creep.

There are hints of other murderously sexy stories of this ilk in “Handmaiden’s” overlong (2:25, really?), Korean-and-Japanese subtitled chapters. Think “Wild Things” or the classic “Les Diaboloques”).

And amidst all the “ripe” scenes of nubile, nude characters, the sado-masochistic twists and turns of the plot and the startling, rich texture of the period detail Park brings to the screen, there are laughs — explosive guffaws at this sexual moment or that delightful twist.

The thriller is mildly thrilling, the intrigues reasonably intriguing. But it’s the sex that sells this. With apologies to Woody Allen, “Handmaiden” is the most fun you can have while laughing while watching sex on the big screen.

Credits:Directed by Park Chan-Wook, script by Chung Seo-Kyung, Park Chan-wook , based on the Sarah Waters novel. A Magnolia/Amazon Studios release.