Movie Review: “Greater” is less than the sum of its jumbled up parts 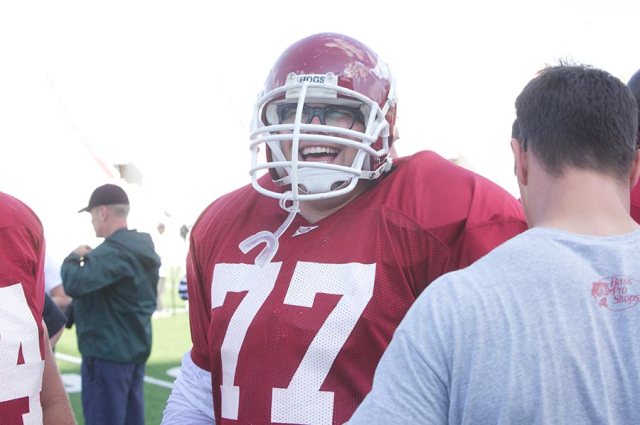 The faith-based football bio-drama “Greater” fails on so many levels one scarcely knows where to begin.

It’s an uninspiring “inspiring true story,” an emotionally barren trial of faith, a dry-eyed weeper in which we know the hero is living on borrowed time.

It’s a “Rudy” that fails to touch, a “When the Game Stands Tall” that isn’t the least bit moving, and a choppy, misshapen mess as narrative.

We have uninteresting actors playing”kids” with crows’ feet passed off as college students. And we have football games that in almost no way mimic the real thing.

It’s about Brandon Burlsworth, a fat kid (Christopher Severino) whose mama (Leslie Easterbrook) raised him to be a good Christian, to show character. But she never let on that at 335 pounds, he was obese.

His dream — her dream — his brother’s (Neal McDonagh) dream — his daddy’s (Michael Parks) dream — was for him to play for the University of Arkansas. He gambles everything on attending and getting on the team as a walk-on.

He’s picked up on by his teammates, who resent his goofy self-righteousness.

“Just’cause this guy thinks he’s BETTER than us doesn’t mean we have to agree with him!”

His coaches cuss him and consider him a klutz. But Brandon puts his mind to it, and outworks everybody else. At a time when football was in decline at this football mad SEC school, Burlsworth’s work ethic inspired his bad teams to improve.

“Character’s what you do when nobody’s looking,” a coach notes.

But to Burlsworth, “Somebody’s always looking.” That would be the Almighty.

Severino is convincingly fat when he needs to be, athletic as the script puts him through “the training montage,” but Burlsworth is dull as a character, and no amount of Razorback hype (“The greatest walk-on in college football history!”) changes that. He’s burnished and has any edge the real kid might have had rubbed off.

His faith makes him a teetotaler, setting up the teammates’ drinking prank scene that we know is coming.

But the faith stuff — with his brother, and others — seems shoehorned in, not organically part of the story or who Burlsworth was.  The film purports to wrestle with “Why do the good die young?” and “Why doesn’t God give us what we pray for?” But there’s no theological authority to answer that, and the choppy flashbacks of the story don’t come to grips with it.  The sage philosopher “farmer” (Nick Searcy) who talks about football and metaphysics and what-not to the older brother may be the silliest script device ever.

And the frame of the film — it’s told as a flashback the brother has on the day of the kid’s funeral — utterly deflates it long before it has run its two hour and ten minute course.

Burlsworth might be a big deal in Arkansas, with statues, a foundation and a myth to go with him. This movie does little to explain why. As a big screen entity, he’s no “Gipper.” Heck, he’s no “Rudy,” either.

MPAA Rating: PG for thematic elements, some language and smoking

7 Responses to Movie Review: “Greater” is less than the sum of its jumbled up parts