They’ve been a familiar sight on the streets of New York, increasingly familiar in hard times, rarer when restaurants, factories and other employers are hiring.

“Canners” collect cans and bottles for New York State’s five cent redemption fee, piecing together enough money for a meal, a cup of coffee, a cheap bottle of vodka or the simple necessities of life by pushing carts, toting bags and riding bikes to places that will pay to redeem their day’s haul.

They are the stuff of myth and legend, subject of movies, TV news profiles (“She paid for college by collecting cans!”). Myth? Because nobody’s getting rich or going to college with scores of people scouring the city competing for the millions of cans and bottles tossed out each day.

The Oscar-nominated documentary short “Redemption” (now on HBO, Netflix and elsewhere) humanizes these people and personalizes this agonizing, aggravating, soul-crushing work. Veteran documentary makers Jon Alpert and Matthew O’Neill (“China’s Unnatural Disaster: The Tears of Sichuan Province“) take a “Dazed and Confused” trek through the boroughs, letting the folks doing this tell their own stories.

They can be affable, like Walter, an unemployed cook rendered unemployable, we’d guess, by a drinking problem. The Jamaican Jamie listens (conveniently) to Bob Marley’s “Redemption Song” while he bikes his haul to a center, glad to meet a Guatemalan who, like him, can’t find another factory job after losing his last one.

“It bothers some people to see going through their garbage.”

There’s the territorial Anne, a “real” New Yorker (lots of attitude), an IBM retiree willing to fight the pushy, cursing Chinese immigrants who lost their sweatshop jobs and try to chase her off this or that dumpster.

The stories are, to a one, touching in their humanity. Nuve, a single-mom in Queens, straining to keep her kids clothed and fed and in school, working a day job and rummaging for redemption money on the side.

“It isn’t much, but it’s honorable work,” she says between the tears.

“Redemption” is a little slice of the New York immigrant experience for those who have few skills, poor English and whose luck runs out. 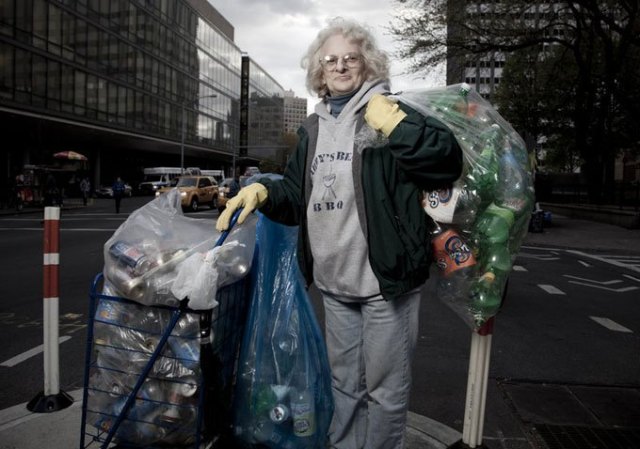 It’s also an argument for a return of bottle and can redemption programs in other states, which abandoned them when cola companies switched from glass bottles to aluminum cans. All over the South, for instance, streets and roadsides and parks are littered with recyclable bottles and cans. In Florida, where I live, there are plenty of back roads in which you can walk for long stretches, along the shoulder, and never set foot on the ground. There are that many cans and bottles tossed out car windows, dumped by long haul truckers at the end of a trip. Piles and piles of them.

And the problem worsens because there is no incentive other than good citizenship to clean up after oneself. Generations in Virginia, N.C., S.C., Fla. and elsewhere have been raised to just toss this stuff, and that has morphed into “toss it wherever.” Sure, recycling plastic bottles saves the ocean and returns an oil-based product to the economy. Recycle 14 cans and you’ve kept ten pounds of carbon out of the atmosphere.

But aluminum, on its own, is worth about a penny per can. Even a modest .5 redemption is enough incentive — not to get slobs to change their habits — to make the effort to collect them. That’s five times as much, per item. A truly progressive state would make it .10 per bottle or can, and get the whole works cleaned up.

Think of it as a work program for the homeless, a bare-bones safety net for the out of luck or unemployable. “Redemption” reminds us that these are real people, struggling, and that every thing else in life is working against them. Make the math, at least, work in their favor and the streets and parks will be cleaner, as well as the air.

MPAA Rating: unrated, with some profanity