Movie Review: Will glib gun dealers get theirs in “War Dogs”? 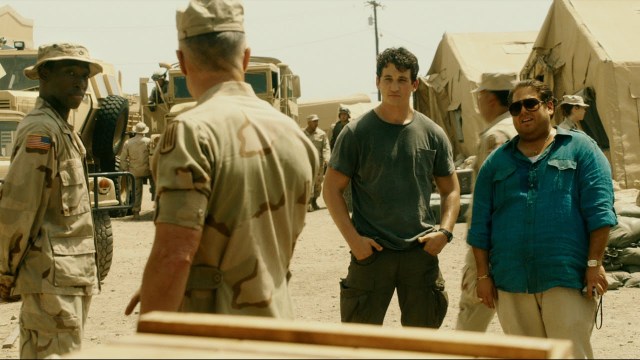 In “War Dogs,” a couple of homeys from Hebrew School take on the job of selling arms and ammunition to the U.S. military — for a big profit, of course.

Because not everybody who got rich off the invasion of Iraq and the ongoing mess in Afghanistan had to be a Friend of Dick (Cheney).

“Hangover” director Todd Phillips brings as much gravitas to this farce — two South Beach drop-outs sneaking arms across borders, circumventing U.S. law in Albania and lining their pockets doing it — as he can. But you never get the sense that he, his stars Miles Teller and Jonah Hill, or the real-life anti-heroes they’re portraying ever grappled with the amorality of it all, the consequences of filling Afghanistan with dated, defective ammo or of flooding the bloodstained Middle East with the arms that will destabilize the place for generations to come.

Teller (“Whiplash”) is David Packouz, our narrator, facing a life of limited prospects thanks to no education and not much going for him other than his Florida massage therapist license.

Enter his old pal, Efraim Diveroli (Jonah Hill), a roly poly fast-talker who has returned to Miami after lining his pockets, slicking back his hair and learning how to price, buy and sell guns online in L.A.

Efraim is moving into middle man arms dealing, finding the “crumbs” in the daily posted Pentagon contracts that other contractors haven’t bid on.

“When you’re dealing with the Pentagon, crumbs are worth millions.”

David is drawn into business with him, and away we go — buying Italian Beretta pistols for the Iraqi police. Italy won’t allow arms exports to Iraq? No prob. They’ll just run the guns in from Jordan.

David keeps this work life from his exotic foreign-born girlfriend (Ana de Armas). He’s learning from Efraim, an up-and-coming hustler who lies like he breathes.

“When does telling the truth ever help anybody?”

That flippancy comes and goes in this glib would-be romp. Tone is tough when you’re snickering at “gun nuts” while you live the good life off underhanded ways of selling them. The movie takes swipes at Bush era bungling and corruption while reveling in it, because, um, these guys had fun doing it?

Bradley Cooper plays a stubbly, shady legend of the blood money business, and Kevin Pollack is a devout Jewish Miami dry cleaning mogul who is their silent partner, doing all he can for Israel — he thinks.

Occasional  tense moments aside, these guys are depicted as having never, for more than a second, encountered the violence they’re enabling. That’s by design. This is how they rationalized what they were doing. David rationalized. Efraim didn’t bother.

And besides, Phillips is least at home co-writing and directing moral quandaries, tense standoffs and the like. He floods the soundtrack with vintage pop tunes, celebrates every time the U.S. Army bails the boys out (physically or financially) and has a hard time whenever the movie needs to turn serious.And he fills the screen with intertitles of the wit and wisdom of Efraim Diveroli.

Hill feigns a high-pitched cackle of a laugh. This is a “Wolf of Wall Street” where he gets to be the wolf. Sort of. It’s a performance at the extremes, designed to irritate. He aims for funny-scary, Joe Pesci lite. He isn’t, though one would think he’d eaten Joe Pesci from the massive weight gain he’s undergone. Still, the comic in Hill riffs laughs into the proceedings — cutting in line at Jordanian customs.

“Tell him I want those shades,” he instructs his 11 year old interpreter. “Tell him in jibberish.”

Teller is meant to be the conscience of the piece, and he doesn’t really manage that — even after David becomes a father. It’s a bland turn, lacking “Eureka” moments of selling out or pangs of guilt.

The story arc is oh-so-familiar, the drugs, the hookers, the over-reach, the blowback. That being the case, Phillips does his movie (based on a Rolling Stone article) no favors by dragging out the trips between the waypoints and going on and on past the climax.

The amoral, anything-for-a-buck yarmulke wearing Jews depicted here border on stereotypes, but if cast and crew weren’t offended, who am I to judge?

Look for the real David Packouz  in a cameo singing “Don’t Fear the Reaper” to the residents of a Miami rest home. And that’s kind of the problem with the movie. It’s engrossing and sometimes entertaining, but too glib to resonate.

Nobody here fears the reaper, even though they’re providing him with scythes.

MPAA Rating: R for language throughout, drug use and some sexual references