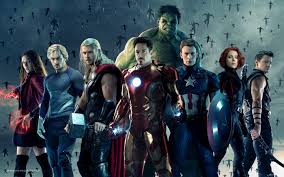 “Casting is 90 percent” of movie-making, the old maxim goes,
and nowhere is that more obvious than the Marvel corps
assembled for these Avengers movies.
Everybody looks right for the part, can play
pathos and humor with aplomb and just reeks of sexy cool.
And kudos to Joss Whedon for managing another deft job of
servicing every character and giving so many — from Robert
Downey Jr. and Scarlett Johansson, to Chris Hemsworth, Mark
Ruffalo and Chris Evans to Don Cheadle and Jeremy Renner
something fun to play and something funny to say.
Who but action-figure-come-to-amusing-life Hemsworth could
make Thor’s dismissal of the frailties of the other Avengers this
hilarious?
“Fortunately, I am mighty!”
And hiring Downey as Tony “Military Industrial Complex”
Stark/Iron Man, was a tone-setting master stroke — witty lines
delivered with bite.
“I don’t want to hear the ‘Man was not meant to meddle’
medley.” “It’s been a real long day — Eugene O’Neill long.”
But focusing on the players is almost all “Age of Ultron” has
going for it. The endless digital brawls have become repetitive,
the story strains to advance the Avengers epic and the themes
explored are weary sci-fi staples.
Seriously, if you want to see a great movie about the potential
menace of artificial intelligence, check out “Ex Machina.”
The post-S.H.I.E.L.D. Avengers are threatened by another
HYDRA villain (Thomas Kretschmann) with another magical
talisman which, when put to the wrong use, could
doom the Earth.
The twist? The “wrong use” is pushed by Stark, who wants
“Peace in our time,” a computer-driven defense program that
would allow the Avengers to retire. Bruce Banner/Hulk (Ruffalo) is
bullied into helping. “Ultron” is what results, an artificial
intelligence voiced with lip-smacking snark by James Spader. So
that Downey/Spader “Less than Zero” reunion happened after all.
Elizabeth Olsen and Aaron Taylor-Johnson play hyper-speed
siblings enlisted in the villainy, so the third and most talented
and fetching Olsen finally gets to play a “twin.”
It’s going to take teamwork and every gadget Stark’s
empire can produce and Nick Fury (Samuel L. Jackson) can
deploy to save us.
That’s the thread Whedon tries to weave through this comic
book film — Avengers as protectors, a National Guard deployed
to evacuate cities lest the body count get too high.
Which it does, of course. Not that the weighty stuff is given much
weight.
It’s all good, somewhat clean (profanity, used for
comic effect) fun, with enemies “multiplying faster than a
Catholic rabbit” and spouses holding down the homefront.
Honey, “You know I totally support your Avenging…”
But the thrill of the new, the delight in discovering how light on
their feet and how trippingly the Whedon one-liners can fall off
the tongue, is fading.
A bloated blockbuster movie-as-commodity like “Age of Ultron”
doesn’t herald the end of this franchise or genre. But you can see
it from here.

violence and destruction, and for some suggestive comments.

This entry was posted in Reviews. Bookmark the permalink.