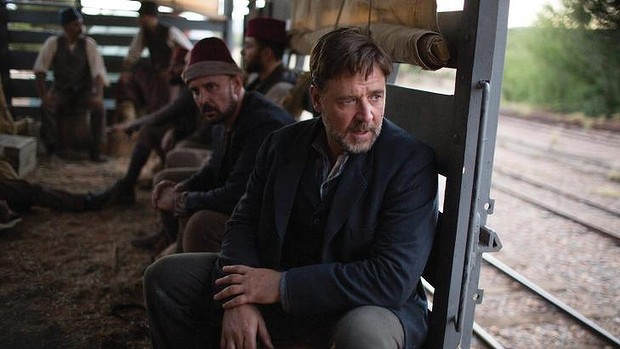 The century-old open wound of Gallipoli, Australia’s ill-fated entry into World War I, makes a vivid and grim backdrop for Russell Crowe’s “The Water Diviner,” a sensitive and sentimental story about a grieving father looking for the bodies of the three sons he lost there.
Joshua Connor (Crowe) works his Australian ranch alone, using his intuition and divining rods to hunt for water, his cattle dog his only conversation companion. His wife (Jacqueline McKenzie( stays busy polishing their sons’ shoes, reminding him to read to the kids from their favorite book — “The Arabian Nights” — at bedtime.
But he reads to three empty beds. The boys went off on adventure four years before, and like thousands of their countrymen, didn’t come home from the Turkish peninsula that Winston Churchill sent them to invade. When Connor’s mad wife dies, he resolves to go fetch those sons and bury them beside her. If anybody can find their bodies, he can.
In Turkey, he runs into the prickly efficiency of British Army bureaucracy and Turkish resentment and disorder. It’s 1919, and the Turks, Brits and ANZAC (Australian and New Zealand Army Corps) are trying to get along well enough to locate and bury the 10,000 ANZAC dead (70,000 Turks died in the battle).
They play semantic games — the winners referring to “Constantinople” and their “evacuation,” the Turks calling their capital “Istanbul” and the Aussie’s departure a “retreat.”
Connor finds an unlikely ally in the stern Turkish Major Hasan (Yilmaz Erdogan), a proud man who doesn’t like the nickname “Hassan the Assassin” the Aussies gave him. And thanks to an over-helpful child ( Dylan Georgiades), Connor finds a nice hotel, “Clean sheets, hot water, no Germans!” That’s where he meets the boy’s beautiful, widowed and hostile mother (Olga Kurylenko).
Crowe directed this with an ear and eye for the sentimental, matching his performance. Connor noble, quiet but determined in his grief, which Hassan, unlike the Brits, recognizes.
“May you outlive your children,” he reminds Connor, is not a Middle Eastern blessing, but a curse.
Connor, guilt-stricken because he didn’t stop his boys from going, knowing that he filled their heads with “Arabian Nights” adventures, closes his eyes and can see the horror of how his boys died. The movies make such deaths neat and final. Not Crowe. We are not spared the moans and screams of those bleeding out on the battle field.
But the film’s forgive and move on message goes a bit overboard for a story set in 1919. The Turks, allied with the Central Powers, are the aggrieved party here. Yes, “You invaded us” is a good start to looking at the war through the other side’s eyes, but making the corrupt, decaying, murderously oppressive Ottoman Empire the “victim” of Greek invaders (a postwar uprising) and shifting sympathies in that direction is eye rolling. Ask the Armenians about that.
Still, the performances are moving and get the job done, and Kurylenko (“Quantum of Solace”) wins us over by the way she slowly lets Connor, her enemy, win her sympathy.
“I measure a man by how much he loves his children,” she tells him, “not by what the world has done to them.”

MPAA Rating: R for war violence including some disturbing images