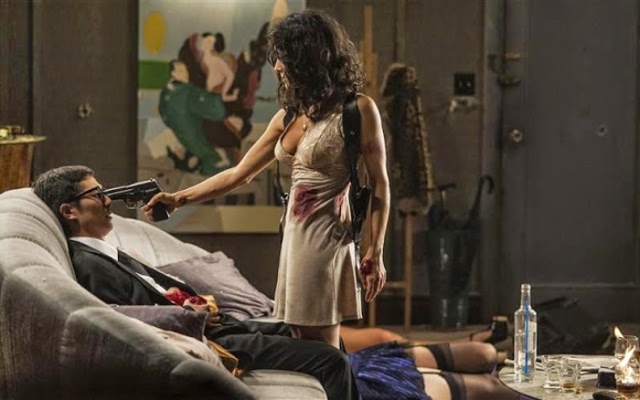 “Everly” is the sort of gonzo guns and Ginsu knives thriller Tarantino made back before he discovered the joys of bloat.
It’s the sort of movie where the titular heroine (Salma Hayek) takes bullets and stabbings and keeps coming back for more.
It’s one of those films in which an apartment building is isolated by corrupt cops, and legions of bad guys are sent in to kill this lone, short sexy Mexican woman — kind of a Robert Rodriguez version of “The
Raid.”
It has the sort of bad guy who hisses lots and lots of threats as his minions are slaughtered by this lady, trapped with guns, dead bodies and a sack of cash in the apartment where the bad guy kept her as his
concubine.
“Frankly, death by my sword is an honor you don’t deserve.” Yeah, he and most of his hired killers are Japanese Yakuza, mobsters with lots of tattoos. And sure, we expect him to eat those words for lunch.
Then there are the neighbors, kept women one and all, women with killer skills which they’re obliged to try out since the woman called Everly has a high price on her head and they’ll like to kill and collect.
Christmas is coming, the movie reminds us. They all have bills to pay.
My favorite moment was the arrival of a dapper, white-haired Japanese gentleman (Togo Igawa) who only knows two words in English. He is “The Sadist,” he says with a bow as his gang of bandits get the drop on Everly. And this, he gestures to a hulking nutjob locked in a cage he’s brought with him, is “The Masochist.”
That’s for the torture sequence in this Joe Lynch (script by TV vet Yale Hannon) gore-fest. Yes, “Everly” is a good picture for the fake blood industry as our heroine spills gallons of it — but very little of her own, despite the holes in her torso.
An instantly forgotten genre picture — the dapper “specialist” character has been in so many Japanese crime movies that the convention was mocked on “The Simpsons” years ago — “Everly” has just enough novel touches to entice aficionados, but not enough to transcend the carnage and cliches. But Hayek, back in the sort of B movie that launched her career, gives good value and will make you cackle in surprise, if you’re the sort who can giggle at the old ultra-violence as it is served up in heaping helpings here.