Movie Review: “The Spongebob Movie: Sponge Out of Water” 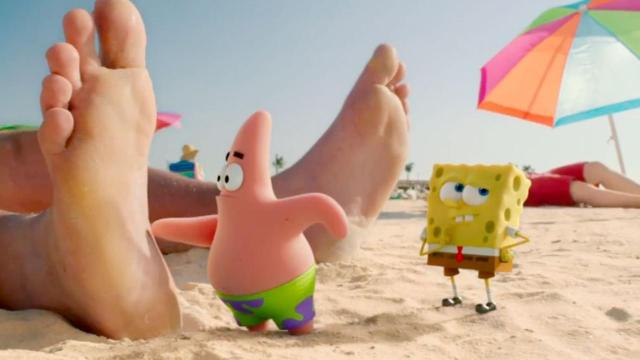 Spongebob Squarepants goes where Homer Simpson and others have gone before, an animated character who steps out of his colorful 2D world and into our 3D one, in “The Spongebob Movie: Sponge out of Water.” But what his movie lacks in originality or freshness it compensates for in loopiness.
A battle to defend The Krabby Patty burger shack is fought “with relish.” And french fries. And ketchup and mustard.
“Unleash the condiments!”
Bubbles, a pan-dimensional dolphin who monitors the Earth and protects it from mid-space collisions, takes a potty break, and comes back with toilet paper stuck to his tail.
“That’s kinda gross!”
And that pirate who sings the title tune? He becomes Burger-Beard, who pirates the Krabby Patty secret sauce recipe, and is played by high-camp counselor Antonio Banderas in full bellow.
“The sandwich gods are angry with us!”
A bit, yes. But also amused by you, just a little.
First, Spongebob (the voice of Tom Kenny) and pal Patrick (Bill Fagerbakke) must fend off their one-eyed nemesis, Plankton (Mr. Lawrence), who wants that secret sauce to save his Chum Bucket eatery from Bikini Bottom bankruptcy. As usual. Then, when that recipe vanishes into thin sea-water, the three rivals must team up to recover it from a different reality, a 3D world that looks a bit like Venice Beach, California (actually Georgia).
Spongebob giggles. Gratingly. Spongebob shrieks .Spongebob sings, annoying one and all. It’s a sappy song about teamwork.
“It’s better when you plus me equals…WEEEEee!”
Squidward squirts a little ink, seagulls sing and poop, and Mr. Krabby (Clancy Brown) frets about all the cash he’ll lose if his recipe, and his legendary burger flipper Spongebob, never return.
“You were like an under-paid SON to me!”
So very childish. But halfway into the film, Spongebob and Patrick cross over and things turn a tad trippy. A visit inside Spongebob’s cotton-candy-packed skull is only half of it. Ideas borrowed from “The Simpsons” and “Hitchhiker’s Guide to the Galaxy” pop up, not that kids will pick up on that.
The gags, puns mostly, skew quite young. And those things Spongebob does that drive his onscreen castmate nuts — the shrieks and giggles and songs — are pitched to be a lot more irritating to adults than to small fry. Perhaps not as irritating as the 3D ticket prices demanded for what is essentially an extended episode of the TV show. But if “nautical nonsense” and that fingernails on an underwater blackboard voice are something you avoid, drop off the kiddies and give’em some cash.