Posted on September 10, 2014 by rogerinorlando 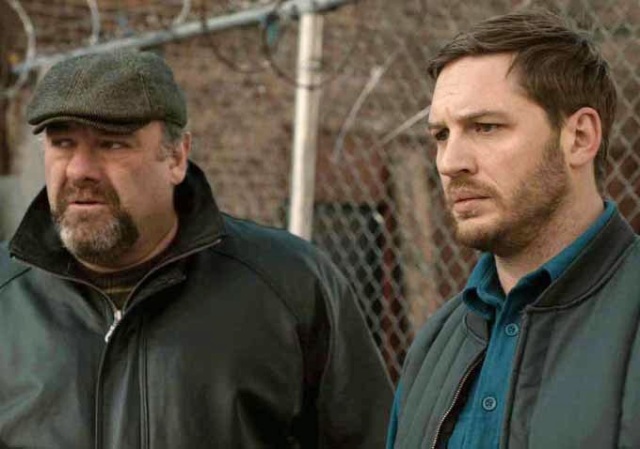 They also serve who pour and observe.
That’s Bob Saganowski’s modus operandi. He’s bartender-for-life at Cousin Marv’s on the cruel side of Brooklyn, a 30something loner living in the house his late parents bought and, from the looks of it, furnished in the 1970s.
Bob notices things, which we gather is a pretty solid survival strategy for this corner of Brooklyn. There’s menace in the air, from Marv, from the customers, from any out-of-the-ordinary encounter on the street, from the guys we see casing the bar, to the cop (John Ortiz) who shows up to investigate the robbery those thugs carry out.
Bob noticed one of the masked gunmen was wearing an old watch that no longer worked. That detail is going to get a lot of people into a lot of trouble.
Because Cousin Marv’s is a “drop,” a place where low-rent bookies and dealers leave bundles of cash for the crime bosses who control them, part of a rotating circuit of bars where scary guys deposit envelopes so that scarier guys can come, after hours, and collect them. You rob a “drop,” the world’s about to drop on your head.
“The Drop” is a simmering thriller from the writer who gave us “Mystic River” and “Gone, Baby Gone,” a tale heavy with the weight of violence we know is coming. Eventually.
Tom Hardy, an actor with violent characters in his past, gives Bob the potential for mayhem. But on the surface, this guy his boss calls a “sphinx” is a pussycat. He rescues a brutalized puppy from a trash can, convinces Nadia (Noomi Rapace) to keep the dog until the weekend while he thinks it over, and then keeps his word to this total stranger. He picks up this pit bull, nurses it to health and uses it to talk Nadia with the short temper and frightened eyes into teaching him to take care of it.
Dennis Lehane’s short story, “Animal Rescue,” has a touch of “Rocky” about it on the big screen, a big galoot softened by a pet and the woman who seems to come with that pet. But even though this is a world we recognize, there’s nothing sentimental about its depiction. Everybody knows everybody else and the locals all know what the cops never figured out, who killed this guy nicknamed “Glory Days” ten years before.
Bob has a limited view of the world. But he’s not stupid. When “Cousin Marv” (James Gandolfini) cusses about the “Russians” who muscle him around and now own his bar, Bob corrects him.
“Chechen.”
The Chechens expect Marv and Bob to recover their stolen money. Fat chance they’re up to that. Everybody here may act “Hard,” but these guys don’t seem to have that in them. Bob looks tough, but has something of the born victim about him, which the wild-eyed creep (Matthias Schoenaerts) who comes looking for the dog he abused picks up on.
“People like me come along when you’re not looking.”
Besides, Bob has already told the cop too much. And like Bob, the cop watches and listens. He’s seen Bob in the local Catholic Church. Often.
“How come you don’t take communion?”
“The Drop” contains one last, great mob movie turn by James Gandolfini, giving him several rich scenes including a great monologue about disappointment with the past and a future that’s closing in around him.
Rapace finally has a Hollywood, English-speaking role to match her Swedish “Girl With the Dragon Tattoo,” and Ortiz gets to play a cop with layers — a flirt, a rule-bender but not as slow on the uptake as he seems.
Lehane, as is his habit, kind of telegraphs the payoff. Casting Hardy (“The Dark Knight Rises,” “Warrior”) feeds into that.
But the big Londoner is utterly hidden behind a Brooklyn accent, playing a man whose shyness is both a physical and an emotional defense mechanism. He may notice the scars on Nadia’s neck, but he won’t ask about them.
“It’s your business, not mine.”
The thrilling tension of “The Drop” is that sooner or later, somebody’s going to make it his business. And we brace for it, all through the movie, knowing there will be hell to pay.