Catching up with Cozi and Nathan, Winter’s Pals, for “Dolphin Tale 2” 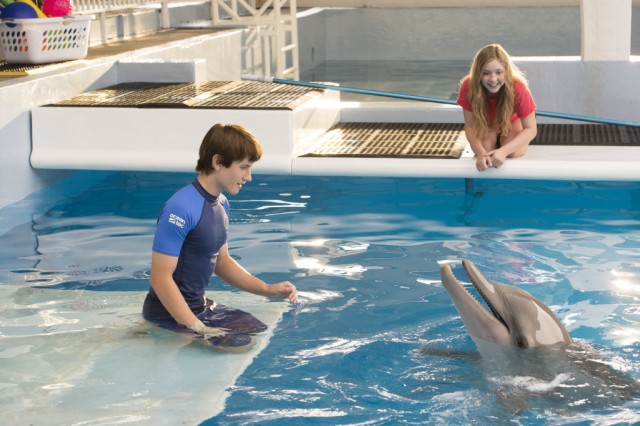 It had been three long years since Nathan Gamble and Cozi Duehlsdorff, the two kids who befriended Winter the injured dolphin, made “Dolphin Tale” with the world’s first dolphin with a prosthetic tail.

Would Winter remember them for the sequel? You really don’t know for sure, Cozi says. But she and Nathan want to believe.

“There was a time when we were filming a pool scene where me and Winter were just chilling, between takes, in the water with a trainer,” says Nathan, already a veteran child actor (“The Dark Knight”) when he was cast in the original film. “I tilted my head to the left, and Winter bubbled and let herself sink way down in the pool. I thought that was weird, but her trainer said ‘Oh my gosh, Nathan, that was one of the commands we taught you to give her in the first film! You tilt your head, she bubbles and sinks to the bottom.’ So she remembered this thing we’d had her do in the first film, years before. Isn’t that cool?”

The two young players — just 12 when they made the first film, 16 now as “Dolphin Tale 2” comes out — sound perfectly sincere when talking about Clearwater Aquarium’s little disabled dolphin and how the movie they made about her changed their lives. It has nothing to do with their careers as child actors, but everything to do with Winter and what she means to the disabled who travel to the Gulf Coast of Florida from all over the country to see her.

“After the first film, we signed on as spokespeople for the aquarium,” Cozi says. “We get to come back there, three times a year, and meet a lot of the kids that Winter and ‘Dolphin Tale’ inspired. So I’ve met many children with disabilities. It’s a special privilege, but it’s so hard, because so many of these kids don’t have much time left. It puts your life into perspective, and in my case, I think it’s made me more mature and more empathetic, hopefully.”

It’s not every child, much less a child actor, who meets hundreds of people with injuries or cancer patients who have lost limbs, at such a young age. But when “Dolphin Tale” became the sleeper hit of 2011, that responsibility came with the territory. Nathan says that “When I was filming ‘Dolphin Tale,’ I really didn’t see, first-hand, the larger impact that this little injured dolphin has had on people. But after the movie came out, I had people coming up to me, telling me how inspired they’d been, how it touched on something their family had been going through. Very emotional. It got me pumped up to do the second film, because I realized how important Winter is to a lot people, and how these movies get that message to more people.”

“Dolphin Tale” opened to tear-stained reviews written by jaded movie critics shocked to be touched by a very simple kid-friendly film about an injured dolphin, taken to Clearwater Marine Aquarium’s hospital, where dedicated staff and a prosthetic limb designer willing to think outside the box concocted a replacement tail for the one she’d lost in a crab pot (trap). The true story was fictionalized, and the most important fictional elements were the two kids who devote themselves to Winter, Sawyer and Hazel, played by Nathan and Cozi.

They were “the toughest roles to cast,” opined Chris Hewitt of the St. Paul Pioneer-Press, “but both young actors are terrific.”

“I think we were all shocked at how much that film touched people,” Nathan says. “You hope you’ve made a hit, but this one connected in a way I hadn’t expected.”

“I was talking about this with Nathan, and not one of these children has a frown on their face when they come there,” Cozi says.” They’re all so special, and so grown up. It’s an odd thing to get used to, meeting people even younger than me who are so mature. It has to be their perspective. They’re going through such horrific things. It makes you grow up. Just being around them makes me grow up, a little, too.”

The sequel reflects the celebrity bestowed on Winter and the little aquarium in Clearwater, the big crowds for Winter, the improved financial state of the aquarium and its turtle and dolphin hospital. But “Dolphin Tale 2” is “more serious, because everybody’s grown up some and Winter’s problems are different this time (a companion dolphin dies in the film),” Nathan says.

“As you grow up, relationships grow deeper,” Cozi adds. “So the second film is just as much about the humans as it is the animals.”

And the young players, like their characters in the film, are facing big life decisions themselves. Do they want to attempt the transition from child actor to young adult roles, or take the time off to go to college? Nathan, a Tacoma, Washington native, seems more committed to the career at this point, “but you never know.”

But Cozi, who sings the closing credits song (“Brave Souls”) for the movie, is already talking about going to college to pursue a teaching degree, perhaps staying active in theater. “I’d love to make it to Broadway, someday!”

And both say they are as committed as ever to the plucky dolphin and the aquarium that saved her.

21 Responses to Catching up with Cozi and Nathan, Winter’s Pals, for “Dolphin Tale 2”