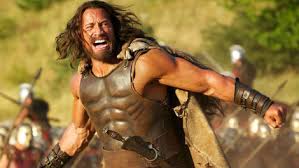 It was a bra-less age, when men wore skirts of leather, planted their feet and commenced to speechifying. About heroic deeds, which they made up, or at least exaggerated — in Greek.

This is the world of “Hercules,” a B-movie with a hint of “300-Lite” about it. Directed by Brett “I almost ended the X-Men” Ratner and starring Dwayne “Why didn’t they cast me in this ten years ago?” Johnson, it’s a brief, violent and narrowly-focused tale of a Hercules utterly removed from myth.

This is Hercules as hired warrior, Herc the Merc, an incredible Greek hulk whose “half-man, half-god” story is declaimed, loudly, to one and all by his brash press-agent of a nephew, Iolaus (Reese Ritchie of “Prince of Persia”).

Iolaus weaves tales of Herc’s 12 labors, his battles with the hydra and gigantic boars and lions. This impresses those who would hire Hercules and his mercenary sidekicks. And theoretically, at least, it intimidates his enemies. Who wants to fight a fellow whom Zeus sired, a man who cannot be killed?

Regarding those “sidekicks” — news to me, too. “In legend, you fight alone,” those meeting the man complain. Herc likes to keep his saga single-handed, for PR sake. But in this tale of the man mountain, he has wily knife-thrower Autolycus (Rufus Sewell), Amazon archer Atalanta (Ingrid Bolsø Berdal), the mute berserker Tydeus (Aksel Hennie) and wizened spear-wielding seer Amphiaraus (Ian McShane) as his crew.

When the King of Thrace (John Hurt) and his hot daughter-in-law (Rebecca Ferguson) need help fighting a warlord, they offer to pay Hercules “twice your weight in gold.”

To which Autolycus cracks, “Eat up.”

The rapists and pillagers confronting Thrace are numerous, tall, bald and painted green.

“Look at me,” Hercules barks. “Do I look afraid?”
Johnson leaves his eyebrow arching bit behind for this action epic, and that’s a pity. The humor is what works best, and most of the funny bits go to McShane, playing a seer who knows when he’s supposed to die, and how — or thinks he knows — and Sewell, every bit McShane’s match in landing a punchline.

What Ratner has turned out here is a myth with all the mythology stripped from it. This 98 minute film has three decent battles in it, and a long training sequence where the Thracians are prepared for battle. Why make a Hercules movie about that?

He’s haunted by the deaths of his family, tormented by visions of the three-headed dog from Hades. Yes, they tell you it’s Cerberus, just in case you slept through that class in school.

Joseph Fiennes shows up as the King of Athens, along with a klatch of character players you’ll recognize. The production team does a swell job of recreating the ancient citadels of the fourth century, B.C.E.

But for all the fun these folks could have had with Hercules maintaining the supernatural assistance facade, or denying it as his handlers gild his lily testifying that it’s true, the movie is content to just go through the motions. Ratner doesn’t so much as ask his actors to walk and talk at the same time. Perhaps the digitally-augmented sets demanded it, but players standing still, staring into each other’s eyes and delivering pep talks, trash talk, threats and jokes to each other is dull and stagy — bad theater.

And Johnson, in a role he was buffed up to play, seems more inclined to go through the motions than his colleagues. At 42, he’s still got the bulk, but the grace of movement is gone, along with the eagerness, the twinkle in the eye and the cocked-eyebrow that always let us know he was in on the joke. “Hercules” was plainly just a paycheck, repayment for all those years in the gym, and in every scene, Johnson reminds us of that.