There is no cell phone application for generating generic spy movie dialogue, but if there was, this film could be an ad for it.

“Berlin is a cruel mistress…Berlin is like the Wild West…Berlin is a small town. I am sure our paths will cross again…Maybe we can make some sort of arrangement…I’ve read your file…Shall we begin?”

Yeah, it started life as a comic book, but come on.

The plot’s twists are foretold too far in advance for there to be much in the way of real suspense. The soundtrack for this set-in-1989 thriller is packed with overly-appropriate ’80s pop. You know a spy picture in ’89 Berlin will have “Der Kommissar” and “99 Luftballoons.” But setting a chase to “I Ran,” covering a secret conversation with “Voices Carry?” The songs match the situations so on the nose they become self-mocking.

But all that said, ALL of it — the short/shorter/shortest skirts, the bottomless shots of Stoli and clouds of cigarettes and hailstorms of bullets — pays off because Theron wills it so.

They’re selling this cut-and-paste parody of a spy thriller on its epic fights, and Theron in the title role takes and delivers beatings in visceral, pulse-pounding, eyes-averting stab-him-with-a-corkscrew bloodbaths.

After which, her body tattooed in bruises, our Atomic Blonde eases herself into a nice ice bath.

British Agent Lorraine Broughton is sent to Berlin just as the Wall is about to come down. There’s an East German Stasi agent (Eddie Marsan) ready to defect with a vast collection of names of agents, double-agents, something or other “atomic” in its explosiveness.

But the best laid plans “gang aft a-gley,” as the Scottish poet said. We’re privy to the interrogation of Agent Broughton, bruised and bloodied, by her controller (Toby Jones of “Tinker Taylor Soldier Spy”) and a CIA watchdog (John Goodman). This grilling frames the film and leads us — entirely too easily — to understanding what went wrong. 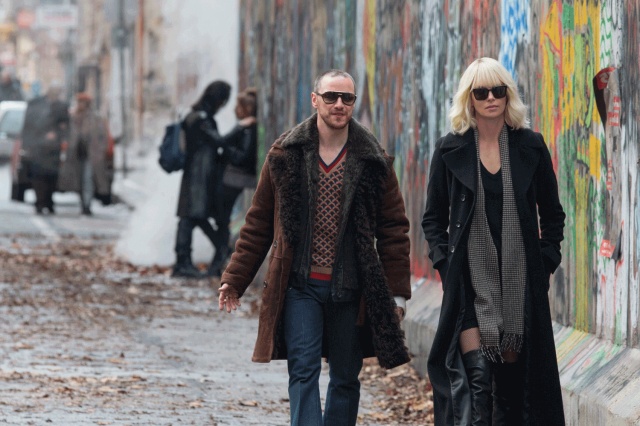 Stuntman (“Fight Club,””300”) turned director (he had a hand in “John Wick”) David Leitch proves he was the right guy for the job with every furious blast of onscreen mayhem.

The car chase is comically over-the-top, but at least the endless succession of flips and crashes are tactile and real — done by stuntfolk.

And the brawls put the beanpole-thin Theron into some of the toughest fight choreography ever staged with a woman. Theron commits, and huge chunks of these punchouts/shootouts are delivered in long-takes, no edits to protect the star or hide the presence of a stunt double.

The confrontations are so in your face that you may want to don an icepack when you get home. I certainly did.

The action beats are such spectacles that they’ll make you laugh. Not that there isn’t the odd funny line.

“David Hasselhoff is in town…Berlin is truly DOOMED.”

Not really, but you could see how they might think that back in 1989.

In between the fights, we’re reminded of how beautiful Theron is by those lingering, hair-over-one-eye close-ups, the Olivia-Wilde-in-“TRON” perfect makeup, the wondrous selection of fishnet stockings and some pretty serious grappling with the fetching Sofia Boutella (“The Mummy”) as a possible rival, or friendly agent.

The ending feels written by committee, and that laundry list of other quibbles can take you out of the picture. But the camera puts you right in the fights, in the car and facing down the barrel of a gun with our heroine.

And Theron and Leitch give this lightweight LeCarre the heft to punch well above its atomic throw-weight.

MPAA Rating: R for sequences of strong violence, language throughout, and some sexuality/nudity

Credits:Directed by David Leitch, script by Kurt Johnstad, based on the comic book series “The Coldest City” by Anthony Johnston and Sam Hart . A Focus Features release.