Yes, when his entry in the Big Book is written on college athlete turned Yale School of Drama character actor Raymond J. Barry, we’ll hear about “Training Day” — the movie and the TV series.

There’ll be mention of “The X-Files,” where the white-haired character heavy played a senator, and “Steel City” and “Little Children” and “Walk Hard: The Dewey Cox Story.”

But never let it be forgotten that “Brave New Jersey,” a no-budget indie comedy with Kickstarter connections and Tony Hale as its star, just might be Barry’s finest hour.

Where else could he, as a 70something WWI vet facing down a town panicked over Orson Welles’ “War of the Worlds” radio broadcast, utter the immortal line “Don’t give me any of that half-assed half-assedness?”

Where but here will we hear him growl, “We’ll burn that bridge when we come to it!”

Barry, as the Lullaby, N.J. town curmudgeon and Hale (“Veep”), as its loopy, put-upon mayor, class up a somewhat lifeless farce about “the Night that Panicked America,” when a vivid, credulous Orson Welles Mercury Theatre of the Air broadcast convinced America’s most gullible that Martians were attacking, and that they’d made their beachhead the wilds of rural New Jersey. 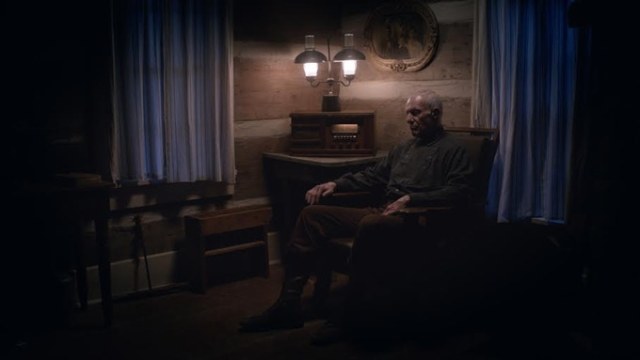 It’s a village that might have become famous as the home of the Rotolactor, a mass-milking machine that village swell Paul Davison (Sam Jaeger) plans to introduce on that fateful All Hallow’s Eve in 1938. But no.

His long-suffering wife (Heather Burns) is the object of the mayor’s lovesick blues, but she can’t notice him, so long as Paul is about to make them all rich.

Then there’s the plucky school teacher (Anna Camp) whose escape from her dull local intended (Matt Oberg) might be the fact that the world is coming to an end.

Or so they all think.

The kids (Grace Kaufman) are convinced. I mean, it’s ON the RADIO, it must be TRUE.

“Mom, how MUCH more do you need to hear? We’re under ATTACK!”

As do assorted locals. And who do they turn to in their desperate hour? The town crank, at 70something entirely too old to be playing a WWI doughboy vet (Those guys would have been about 40 in 1938).

The film’s anachronistic score and assorted chronological/logical errors like that one wouldn’t be an issue if every character was as funny as Old Man Ambrose Collins (Barry) or his profane takes on their situation.

The TV movie “The Night that Panicked America” was the definitive spin on this story, decades old and G-rated (none of the F-bombs this movie features). But there’s no sin in taking another shot at it. It’s just that this one has nothing much to offer, archetypal characters giving rote performances of a script that needed serious workshopping and edge-adding.

At least Barry, growling and dressed in a trench coat back when we knew what TRENCH coat meant, gives fair value. Hell, the man’s seen things that…well, you know.