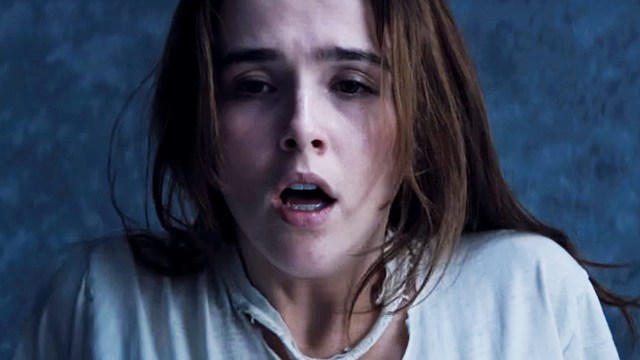 It’s easy– far too easy– to dismiss “Before I Fall” as a sad-faced teen “Groundhog Day.” Because for the first 45 minutes, that’s all it is. It’s only later that it gains weight and emotional heft. And it’s worth the wait.

Teenager Sam (Zoey Deutch) gets killed in a car crash at the end of a day in which she dismisses her family, kowtows to the Mean Girl in charge of her clique, saves her virginity for a dopey beau unworthy of her and is cruel to almost everybody she meets.

And she has to relive her last 24 hours over and over until she makes things right.

It is “Cupid Day” at rainy/foggy Pacific Northwest High. The whole school is organized around getting roses delivered to your teen beloved, in the middle of class. The gay girl (Liv Hewson) gets none.

Even the tormented trainwreck Juliet (Elena Kampouris) gets a rose. But that’s just a cruel joke, played every year by Lindsay, the Mean Girl Queen played by Halston Sage.

There’s a party, with teen drinking. And then a drive home — a teen in charge of the rollover-prone late model Ford Explorer. That’s almost child abuse.

The gimmick, based on Lauren Oliver‘s “Groundhog” derivative YA novel of the same title, has Sam waking up, day after day, trying to alter her fate, trying to do better, trying to live up to the note of the boy (Logan Miller) whom she rebuffs, day after day, but who “knows” her like nobody else.

She is slow to figure that out, to seek redemption for the purgatory her 18 year-old life has become. She rattles through the Kubler-Ross five stages of grief over realizing your impending death — denial, anger, bargaining, depression and acceptance.

She vamps, insults, tries to be better, then stumbles and stumbles again. She’d have a clue if she picked up on what her literature teacher was talking about in that one class she has to take and re-take, time and again.

Like seemingly all her classmates, Sam is rich, a beautiful “girl next door” who is just the sort of knockout Jennifer Beals (playing her mom) would have. She’s spoiled. So we don’t like her. And looking in the mirror each day, she doesn’t like her, either.

Her story arc is pre-determined. But Deutch (“Everybody Wants Some!”, “Dirty Grandpa”) strains to make her character unlikable. Director Ry Russo-Young and screenwriter Maria Maggenti botch things up by having Sam narrate her tale, when it’s much more interesting and challenging to let the audience figure out what she’s learning, and how, by her actions. Deutch seems up to doing that without spoon-feeding the audience her journey with voice-over.

But damned if the picture doesn’t overcome that with some keen insights to teen thinking and teen behavior. The over-the-top girl-bonding, the sing-along with their favorite tunes (by Big Data, Scooter Island, Grimes, Kurt Vile), the obsession with appearance, tactless cruelty, the abrupt best-friend/worst enemy transitions — spot on.

Just wait for the third act, after all the “here we go agains” and failed attempts at living up to a poster — “Become Who You Are.”

We know the wrongs Sam must right, the unkindnesses she must replace with kindness, the misjudging that must be overturned. Sam gets her roses, every day. She rebuffs Kent (Miller) every day, tries to save herself from that Explorer wreck that awaits her almost every day.

“Remind me again. Why do we hate Juliet?”

I love the way the movie has Sam seek redemption in the obvious places, and the non-obvious ones. How does a Mean Girl get to be mean? What hidden hurt is Lindsay hiding?

What tiny gestures could turn the tide with Sam’s parents? What gift can she give her baby sister that will last a lifetime?

Because her fate is set. It wouldn’t be a weeper without the tragedy we see repeated, in many variations, time and again.

Teens are immortal. Ask any teen you know. Look at their behavior, living every day like Keith Richards, texting and driving and taking heedless risks by the bushel basket full.

It’s not a great movie, a deep film or a transcendent experience, the way “Groundhog Day” is. But “Before I Fall” is an admirable knockoff, a “teachable moments” movie about that first time we take stock, realize the what and who we should treasure, and let them know it.