It’s a stupid, ill-plotted heist picture, but “Collide” does have its moments.

Start with the car chases. Sure, some of the sprints through the narrow streets of rural Germany look as if they were staged at half-speed and sped-up for the finished print. But the crashes are epic.

And the cars? They’re a plot point, a means of transporting drug money to Chile, Euros stuffed into the bodywork of pricey roadsters — Jaguars, Aston Martins, Maseratis, an AMG Mercedes and the like.

Then there’s the lip-smacking pleasure of seeing those Oscar winning British hams Ben Kingsley and Anthony Hopkins sharing a couple of scenes, devouring dialogue, embellishing it, exploding and generally overdoing it and plainly enjoying themselves as they do.

“You know deeefference between horse and hooker?” the Turkish drug dealer with a love of all things golden, Geran (Kingsley) bellows. “Me neither.”

Hopkins, playing a “respectable” British/German tycoon with a secret drug-smuggling side business, impersonates Sly Stallone, blurts “That’s the way it IS, bro,” and growls “Never was a story of more woe, than this of Juliet and her Romeoooooooo,” for good measure. 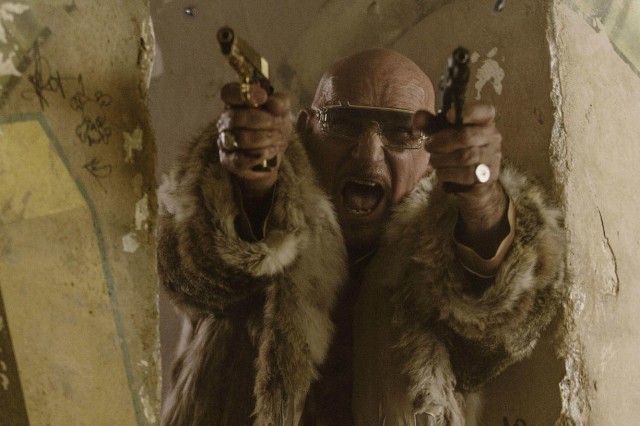 The plot? Nicholas Hoult plays a street dealer in Cologne who gives up that life for the Girl with Something Extra. That would be the barmaid with the overbite, Felicity Jones.

It’s foolish to cast two Brits as two Americans in this, especially in Jones’s case, as much of her charm is her accent. But that’s the way a German movie with Chinese money aimed at the American market has to go, so there it is.

And nobody but nobody spreckenzies deutsch. Americans, Turks and Brits who have lived there forever, not a mein kamf among them. Only the odd “Raus!” and “Schnell!” from the minions.

Casey Stein (Hoult) used to be a car thief, something his old drug boss (Kingsley) knows. He keeps calling Casey “Burt Reynolds (“Boooort REE-nolds”)” when he’s not raving about the wonders of the 1985 workout video/thriller “Perfect,” starring Jamie Leigh Curtis and John Travolta.

“Should have got an OZZZZZCAR!”

When Casey needs “one last score,” Geran the Turk calls on the lad’s former skills as a thief and driver to get even with his uneven business partner (Hopkins).

The half-baked caper takes place in the first 25 minutes of “Collide,” and the rest of the movie is a chase/shootout/torture scene after torture scene extravaganza as Hoult’s Casey tries to escape one mobster and enlist the aid of another, stealing everything from Peugots and Astons to Mercs and Jags. The bad guys keep catching him, but they…want to TALK.

He’s got to get back to his girl, right?

Hopkins ranges from quiet menace to manic, Kingsley gives his charming-to-alarming thug the mien of a put-upon furious foreigner trying to fit in, with hookers, gilded guns and travel trailers and a gold colored Jaguar. These two going at it hammer and tong is a real movie buff’s delight.

The story can withstand no scrutiny whatsoever.

But those hams — and I grew up in Virginia, I know from hams — distract us enough that we don’t mind the mess between the car chases. Not that much, anyway.