There’s a reason one hears little about the screen comedy of Germany, and it becomes obvious in the last two hours and forty minutes of “Toni Erdmann,” Germany’s contender for the Best Foreign Language Oscar at this year’s Academy Awards.

The first gag in it — showing the elderly practical joker Winnifred (Peter Simonischek) having one over on a  hapless delivery man , pretending the package “is for my brother…just out of prison…mail bomber,” then donning fake teeth to come to the door as that twin — is the funniest.

But there are riches in this meandering dramedy about a father trying to find a bigger place in his workaholic daughter’s life, and to lighten her stress-load, by posing as a “life coach” to her superiors. That’s why Hollywood has snapped up the remake rights and supposedly lured Jack Nicholson out of retirement to take on the title role, with Kristen Wiig (on the nose) as the frazzled, overwhelmed daughter.

Hollywood will simplify it to that big concept, and trim writer-director Maren Ade’s flaccid storytelling and many aimless scenes into something tighter, funnier and almost certainly less German.

Winfried lives with his elderly dog and inspires wackiness at the Aachen middle school where he teaches music (and dresses the kids like zombies for an ironic “going away” party for another teacher). He’s divorced and rarely sees his daughter Ines (Sandra Hüller), a consultant who jets between Shanghai and Bucharest, courting clients and telling them who to lay off from their companies.

Even when she shows up at a party at her mother’s house, she can’t tear herself away from the phone. She has no time to see granny? No worries, he’s hired an actress to play her and grandma cannot tell the difference.

“It’s a JOKE,” he bellows (in German), the mantra of failed jokers in any language. All she sees is an old man who lacks ambition now, and probably always has.

So Winfried drops in on her life in Bucharest, sees what’s she’s become, senses that she’s miserable, and after repeating his “hired somebody to play her” gag with her client (Micheal Wittenborn), resolves to inject some of his sort of fun into her stressed-out life. 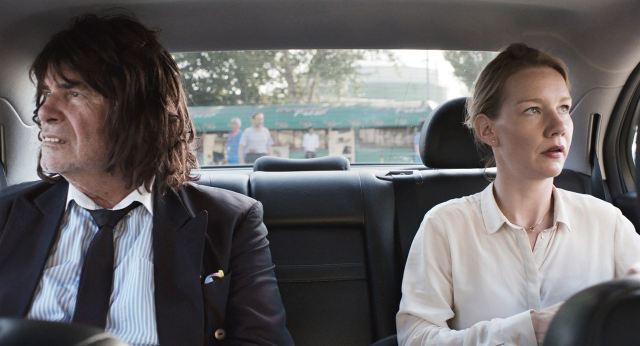 He dons a wig, fake teeth and a rumpled suit and crashes her parties, her restaurant meetings, passing himself off as Toni Erdmann, sometimes a life coach (and friend to tennis coach Ian Tiriac, one of the most famous Romanians), sometimes the German ambassador to Romania.

He sees Ines’s loneliness and shudders at the heartless line of work she’s in. He hurls her into a series of daft improvisations — lies on the fly. What brought him to Romania?

“I’m here for the famous dentist,” he improvs, flashing his grotesque choppers.

And she, taking up the challenge, drags him along, lets him see her using cocaine with her friends and the crippling pressure her boss (Thomas Loibl) hangs on her.

Ade treats us to the state of Ines’s psyche by putting us in her meetings, where she is but a yes-woman, careful to tell the client exactly what he wants to hear, and into the secret loveless love-affair she’s having with a colleague. Ade stages one of the most bizarre seduction scenes you’ll ever see, where Ines takes on a little of her father’s embrace of the surreal, manipulating that colleague (a subordinate) in a sexual sense.

Toni drags  her, calling her “my assistant,” into the real Romania, visits to the oil workers she will lay off, to a rural family gathering where he insists they gift their hostess with a song.

“Toni Erdmann,” in English and German with English subtitles, is a melancholy comedy about two lonely people that makes you wait for its laughs and special moments. But those moments, when they make their surprise arrival, are stunning in their emotional rawness and stark comic simplicity.

Still, that staggering running time and the leisure pacing of this, all the scenes that do little to further illuminate characters and do nothing to advance the plot, make one anxious, in this one case, to see “The Hollywood Version.” It will will probably be funnier and certainly be shorter, even if it is less German.