Posted on November 29, 2016 by rogerinorlando 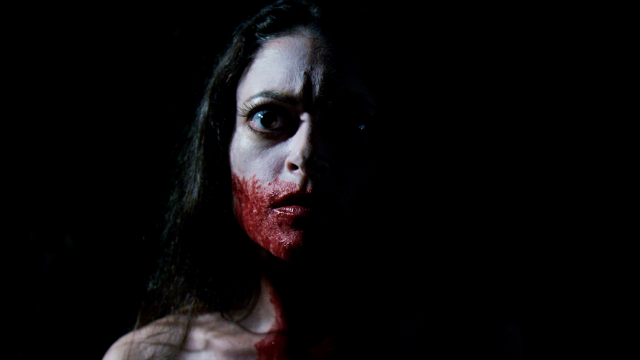 Mr. Nyx is the guy you call when you’re a cop somewhere in the South and you stumble across a de-consecrated church filled with blood, candles, pentangles, goats kept in cages and corpses.

He surveys the scene from behind his round sunglasses and trim goatee.

“Amateurs,” Nyx, played by horror film vet Justin Welborn, drawls. He was in “Beyond the Gates” and “The Crazies” And “v/h/s Viral” and “Halloween II.” He knows the drill. He’s the guy who knows what happened here. And hell, he’s just the sort of goatee’d demon to take advantage of what he’s found — a creature unleashed by those “amateurs,” one whose song is as alluring as her arrival is deadly.

“SiREN” is another bachelor party gone wrong film, another quartet of guys following a fellow they meet at a strip joint off into the woods for some REAL stag party “experiences.”

“Only good things happen in the woods, right?”

But this spin-off from “Amateur Nightt,” a short from one of the “v/h/s” horror anthologies, has some jaw-dropping twists tossed into its cut-and-paste script, and a droll villainous turn by Welborn.

Because when bad things are going down, murderous masked thugs, a moveable sex club straight out of “Eyes Wide Shut” and the demon unleashed within it, you need a bad guy who will rub his goatee and thoughtfully answer your every question.

“What are you gonna DO?”

“Well, he’s going to HURT you a while, and I’m gonna WATCH.”

Chase Williamson is Jonah, the lad about to marry Eva (Lindsey Garrett), a fellow who’s too nice and too square to get into the role playing sex games she invents to spice up their love life.

But brother Mac (Michael Aaron Milligan) has a gonzo weekend planned for Jonah and two of their friends. When the rural strip club’s a bust, he busts out the mushrooms.

And he drags them all into the woods, following a tip from a barfly, that this is where the REAL “last hurrah” experience lies.

They’re just getting into the kinky, abusive stage show and their mixed drinks — “Murder” features leeches dunked into the alcohol — when Jonah has a back room peep show epiphany. There’s a naked singer there, held against her will. He’ll bust “Lily” (Hannah Fierman, sexy/creepy) out and save her, take that Satanic shackle off her ankle and see what transpires.

“A transsexual? That could be cool!”

Things were going downhill for the quartet before that. Plainly this club’s real entertainment is what happens to “first-timers” at the hands of the masked patrons and bouncers there. But when Lily shows her teeth, and her tail, well…

If you know your mythology, you know the siren’s call is irresistible. But Odysseus, the Greek adventurer, didn’t have access to earbuds. Director Gregg Bishop makes great use of muffled sound to get across Jonah’s efforts to avoid the slaughter Lily unleashes.

It’s rarely scary. But the effects suggest a bigger budget than “SiRENS” might have warranted. And a couple of those are downright impressive and add to the feeling that this indie Satanic slasher pic is punching above its weight class.