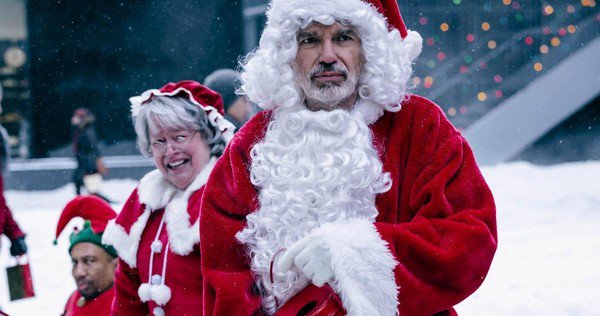 So, Christmas comes twice this year.

Or are we just talking about Santa?

Billy Bob Thornton revisits his most infamous role with “Bad Santa 2,” reprising the foul-mouthed, safe-cracking,anal-sex obsessed loser who discovers the true meaning of Christmas from a kid he keeps calling a “re-tard.”

Yeah, the shock of a politically incorrect, suicidal, drawling dead-ender has worn off in the dozen years since “Bad Santa” dropped its a dollop of strychnine into the holidays. When you’ve elected a “short fingered vulgarian” president, where’s the jolt in Jolly Olde Saint Nick swearing?

The best gag in the film might be the first one. As we left Willie in a hail of bullets at the end of “Bad Santa,” it’s a shock to see him groomed and confident behind the wheel of a Mustang convertible. Did he get to keep he cash at the end of that botched heist?

Then he’s distracted by a woman and a rear-end collision (ahem) brings him and us into reality. He’s just lost another Phoenix job, this one parking cars.

The overweight oaf of a kid (Brett Kelly) is now legally an adult, still slow, still thinking of Willie as his personal “Santa.” But the return of the treacherous dwarf-crook Marcus (Tony Cox) pulls Willie out of Arizona and into Chicago. Marcus talks him into another heist — this one at a holiday bell-ringing charity in the snowy/Windy City.

“Why are you even out of the joint anyway? You know, they used to sterilize guys like you, to keep the world from becoming some negro Land of Oz.”

But once the early insults are out of the way, the third partner makes herself known. That would be Sunny, Willie’s long-estranged ex-con mom, played with filth, verve and a covering of tattoos by Oscar winner Kathy Bates.

The mark is this charity run by a rich couple (Christina Hendricks of “Mad Men”), but to get access to that cash, first the trio has to dress up in red and white and ring a lot of bells. Their cash take on street corners isn’t all that, as they swap gruesome insults about every patron who passes — especially the ones with ugly babies.

Hendricks gets to play a moral crusader with an inner (sexual) freak, Marcus has to court a plus-sized guard (Jenny Zigrino) with an allegedly open mind, Willie has to work out some nasty mommy issues and the slow kid has to follow Willie from sunny Arizona to snowy Chicago without the good sense to wear long pants.

Director Mark Waters is a long way from “Mean Girls,” and the one thing he could have brought to this that surprised was talking his “Freaky Friday/Mean Girls” muse Lindsay Lohan into a cameo. Instead, Octavia Spencer, who has won an Oscar since playing a lowdown and dirty hooker in “Bad Santa” comes back, and brings her own enema. She remembers Willie’s sexual predilections.

Hendricks’ sex-in-the-alley cat doesn’t have the “Wait, is that a Gilmore Girl getting her Santa freak on?” zing of Lauren Graham’s turn in the first film. We’d expect no less from the busty “Mad Men” bad girl.

Thornton and Cox can still manage those long raunchy riffs that deliver laughs. But Thornton doesn’t let Willie’s desperation show this time. He’s too groomed, too fussy about his hair. Willie’s unlikely sex appeal is a little less absurd.

Bates brings extra or that fresh to the table, and the film sorely misses the late John Ritter and Bernie Mac, who played the foils to Willie and Marcus and their schemes. The “villains” here are too lame to name, and will not be putting this on their resume reel.

But the take-away impression from “BS 2” is that the vulgar world has passed it by, that it’s power to shock has dissipated by all that’s been said and done and elected in the intervening years. A drunken, swearing, whoring St. Nick? That’s all you’ve got?

MPAA Rating: R for crude sexual content and language throughout, and some graphic nudity