Posted on November 3, 2016 by rogerinorlando

Proto-punks Iggy and the Stooges were once and have remained an acquired rock taste, and “Gimme Danger” won’t  change that. Jim Jarmursch’s History of The Stooges won’t convert many. But you will walk away with an appreciation that goes beyond the band’s anarchic legend and the lead singer’s seemingly ageless physique.

Rock and Roll Hall of Fame members mostly thanks to their influence over the punks that followed, from The Dictators and The Ramones to Sonic Youth and so on down the line, The Stooges brought a sometimes violent, flip-the-bird-at-the-world energy to the generally staid and corporate music scene of their era.

They burned bright, but never broke through, endured much but broke up. Iggy (real name Jim Osterberg) went on to outlast his most closely allied contemporaries, Lou Reed and David Bowie.

And then the world got around to the band that he made and that made him, decades after their supposed expiration date.

Jarmusch (“Coffee and Cigarettes,””Broken Flowers,””Mystery Train””Night on Earth”) builds his film around the founder/singer, whom he insists on crediting by his real name, Jim Osterberg. The future Iggy was a “Howdy Doody” fan child of the 1950s who fell in love with the chaos and unpredictability of Clarebelle the Clown from that show, and the anarchy of social misfit kids’ show star Soupy Sales.

From there, a punk showman was born.

Sitting in his living room with a self-portrait (I assume) behind him and a skull on the pedestal beside him, Iggy regales us with his music history, the bands and stunts that led him to form The Stooges. 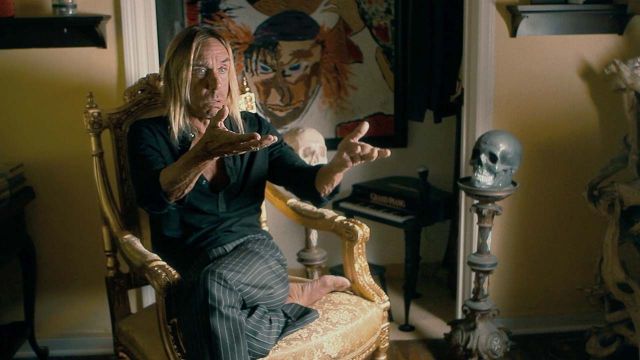 In his first band, he’d perform on top “of the biggest drum riser” (sixteen feet above the stage) as a gimmick. That was his instrument, the drums. But he got “tired of looking at other people’s butts” and became a singer.

And eventually, the Asheton brothers, Ron and Scott, joined up. And Mike Watt. And sax player Steve Mackay. And later guitarist James Williamson, who went on to a successful career at Sony Music, only to dump the suit and the haircut the minute Iggy said, in the early 2000s, “Let’s get the band back together.”

We see, or rather hear about, the scary, bottles-hurled-at-the-stage violence of the shows, driven by Iggy’s manic, crowd-working energy and frenzied, spastic dancing (while his backing band stood stock-still, staring at their instruments or the floor).

We experience the inventing of “stage diving.”

And we hear about influences, from James Brown (of course) to their Detroit area contemporaries, the furious punk progenitors, The MC-5 (“Kick Out the Jams”).

The most fascinating material is anecdotal — Iggy talking about growing up in a trailer, wanting to “show up” the high school kids who looked down on him for that. The evolution of The Psychedelic Stooges (Iggy in pre-glam white-face makeup) to The Stooges makes a funny story. A band member called Moe Howard of The Three Stooges to ask permission if they could use that name.

Howard’s reply is perfect, and profane.

There are reasonably fresh interviews with members of the band who have recently died, some archival interviews with those who passed away earlier, and brief descriptions of the drug-addled lifestyle that put them all in danger of not outliving their legacy.

Music taste-maker and impresario Danny Fields, subject of his own recent documentary (“Danny Says”), talks about “discovering” them.

What’s missing from the film is context, both contemporary to the band’s formation and rise, and words from those plainly influenced by them. Iggy talks about the “political industrial complex of corrupt performers and managers” making soulless “corporate” music that The Stooges burst out in contrast to, but we only glimpse Graham Nash and David Crosby crooning a ditty to illustrate this.

Iggy wasn’t the first shirtless rocker to prance around in leather pants (The Doors, whom Iggy has acknowledged elsewhere). And Iggy’s signature tune came decades after The Stooges tried and failed (“Lust for Life”).

There are no testimonials from The White Stripes, Dead Boys, the Damned, or Sonic Youth or any grunge or punk acts that owe a debt to The Stooges. Bowie, still living while this was being filmed, isn’t here.

Conversely, “Gimme Danger” does its greatest public service by pointing out that these dudes could play. The songs, from “I Wanna Be Your Dog” to “1969,” to “Search and Destroy” and “No Fun” have been covered and rediscovered by major acts in every succeeding decade. Maybe not “the greatest band ever,” as the opening titles tell us, but certainly a big deal band that has rippled through time.

No 108 minute music history can hope to be complete, and the circumscribed “Gimme Danger” is very much a mixed bag in that regard. But Jarmusch gets a lot right and a lot documented on film in this winning and sometimes amusing musical history tour.

Credits:Written and directed by Jim Jarmusch. A Magnolia/Amazon Studios release.