Movie Review: “Magnificent Seven” only middling this time around

Antoine Fuqua and his screenwriters take care to credit the original Japanese “Seven Samurai” screenplay, and still utterly miss the point with their “Magnificent Seven” remake.

A tale of redemption, of desperate men facing their fates with the fatalism and bravado of their code becomes a simplistic shoot-em-out under the director of “Training Day.” It’s all about revenge, gunplay and mass slaughter, with sassy characters delivering death and jokey one-liners in the Old West.

Fuqua tried, in other words, to deliver “the cool parts” of the 1960 “The Magnificent Seven,” but seems to have forgotten much of how those were set up, given nobility and meaning, by the Americanized version of Akira Kurosawa’s film. And slapping Elmer Bernstein’s iconic score over the closing credits doesn’t excuse all that comes before.

Denzel Washington has the Yul Brynner role, that of a man in black with a black hat on a black horse — a black man, this time — summoned to save a town under the thumb of a ruthless gang of cutthroats.

The gang, this time, are the hired guns of a rapacious mine operator (Peter Sarsgard) whose mines poison their water, enslaves miners and demands that every other honest citizen in Rose Creek sell-out and leave town.

“I seek righteousness, as should we all,” she hisses. “But I’ll settle for revenge!”

Chisum — “not a bounty hunter” — proceeds to use his own “Most Wanted” list –ostensibly, the desperadoes he is supposed to be hunting — to flesh out his posse. 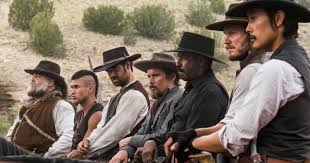 Chris Pratt is the wisecracking, card-hustling, hard-drinking Faraday, who interrupts the brothers who are about to shoot him with a card trick.

“You’ll get a hoot outta this!”

Manuel Garcia-Rulfo is the Latino pistolero they need.

Ethan Hawke is the drawling New Orleans-born sharp-shooter/poet who quotes Shakespeare and comes with his very own Chinese knife-fighter partner (Byung-hun Lee). They somewhat resemble the Robert Vaughn and James Coburn characters in the 1960 film.

Matrin Sensmeier is a Commanche exiled by his tribe and ready to sign on.

And Vincent D’Onofrio, plus-sized, high-voiced and Bible quoting, is the aged mountain man/Indian fighter who steals the movie.

“I b’lieve that bear is wearin’ people’s clothes.”

I liked the weathered, dust-covered (save for Denzel’s duds) world Fuqua gives us, though that attention to detail wavers during the epic shoot-out that is the film’s long, drawn out finale. Characters fill the air with lead, shriek about being “low on ammo,” while we can see gun belts fully laden with bullets around their waists.

History’s laziest Westerns, many of which starred John Wayne, featured those magical talismans the Gatling Gun and dynamite at crucial moments. It’s not a spoiler to say they turn up here. The derivative, unschooled script makes us expect them.

This “Seven” is more diverse, less patronizing than the famous Western it remakes. But it lacks the moral certitude and righteousness of its predecessor, a pre-Vietnam “America saves Paradise from a Dictator” allegory.

Stripped of their samurai origins, no longer hungry swordsmen or gunmen desperate for one last gasp at making a noble statement as they earn a few meals and a pittance from peasants, most of the characters lack the higher purpose that motivated earlier versions of this tale.

And without that, all they’re left with is one-liners and six-shooters, both of which pop off with unerring precision if little motivation.

MPAA Rating:PG-13 for extended and intense sequences of Western violence, and for historical smoking, some language and suggestive material