Posted on September 20, 2016 by rogerinorlando 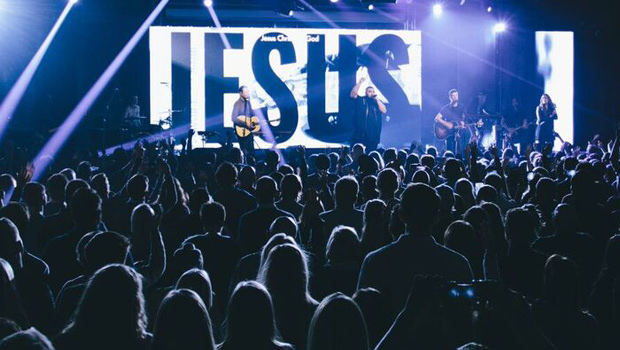 The charms of “Hillsong: Let Hope Rise,” essentially a tour documentary about a big pop band created by an Australian megachurch, plum evaded me.

Meandering, stream-of-Biblical consciousness tunes, all under-written and over-produced pop pablum, performed by bearded, ripped-jeans wearing 30something white Aussie hipsters? Who wants to hear that? Or see the (labored, but not inspired) music in the process of creation?

Many do, apparently. They don’t play to empty houses.

The youth ministry group Hillsong provides subtitles with the lyrics, not just for the film, but on stage as well. They’re the sort of tunes one forgets before first hearing — generic, wussy chords, murky sound mixes that don’t seem to capture half of the instruments we can see members “playing” on stage.

No, kids. Raising your hands to the sky doesn’t make the songs better. It just signals your audience to grade you on the Christian curve.

It’s a musical ministry that has toured the world, a dozen or so musicians “with purpose, with a calling.”

They’re a “family ministry” (lots of people with the same last name, like any family business). Group members declare “You don’t work for a church to earn money…It’s not worth what we’re being paid, but it’s worth what we’re doing.”

They’re looking for converts, or actually to revive the already converted, with their tunes about the one “seated on high, the Undefeated One…There is no other name — Jesus Christ, Our God.”

You don’t have to question their sincerity — their back stories, families separated for months at a time during tours, the baby born with a heart murmur, the worship leader whose sister killed herself — to roll your eyes at these wimpy, flat shimmering piles of notes they call songs. Michael John Warren’s film renders the stage productions honestly, the tunes open to lyrical mockery and the band itself whiter-than-whitewashed, duller than dull.

“The songs mean nothing if they don’t help people connect with God,” one member — and really, aside from Taya Smith, they all blandly blend into one — proclaims. So the tunes, pieced together on smart phones and then vetted by their ministry for Biblical rectitude, aren’t necessarily meant to be chart-topping singles. Still, the film reveals a creative process that is short on…something.

They’re passable singers, but nobody who could cut the mustard on Broadway or “Australian Idol.”

They say their biggest worry, in between facing enraptured True Believer crowds in famous venues all over the world (Red Rocks, the LA Forum) is “being underwhelming.”

Are you ready for some bad news, kids?