Movie Review: “Our Brand is Crisis” 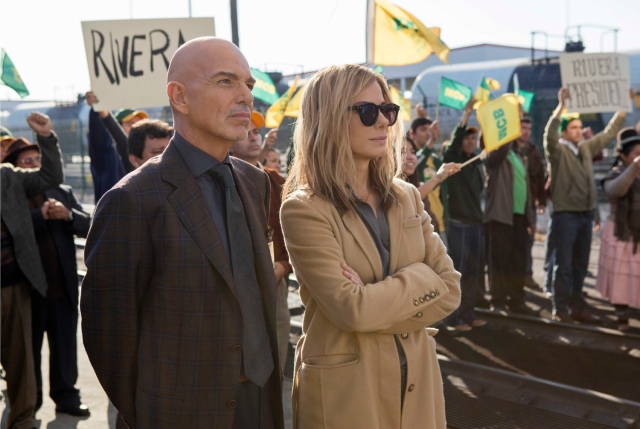 We don’t really remember that decade of bad Sandra Bullock movies that came before her Oscar winning turn in “The Blind Side.” We just remember how she looked.

The pratfalls might be half-hearted, the misty-eyed appeal to sentiment might be grating. But the makeup and whatever other strategies she has used to fend off aging was perfect. The romantic backlighting was just so, the wardrobe, flattering and just sexy enough.

That’s the sort of movie “Our Brand is Crisis” turned out to be. High-minded — it was produced by her “Gravity” co-star George Clooney and his producing partner — with a message and a moral, this strangely dispirited “romp” through American-style spin-doctoring transplanted to impoverished Bolivia is the last movie you’d expect David “Pineapple Express” Gordon Green to direct. With good reason.

Bullock plays Jane Bodine, a burnt-out campaign manager summoned from the snowy backwoods to fly to South America and help a flailing candidate gain traction with his voters. That first scene tells us that she’s a recovering alcoholic, that she used pottery as her outlet for the six years she’s been away from “the game.”

And it tells us that screenwriter Peter Straughan (“Tinker, Tailor, Soldier Spy”, TV’s “Wolf Hall”) isn’t giving us his A-effort, here. “Calamity Jane” is a backwoods cliche and could be next-door neighbor to Mark Wahlberg’s “Shooter.”

Jane has flashes of her old bravado.

“The truth is what I tell the electorate it is.”

You might wonder who is actually footing the bills, paying to assemble this crack team (Anthony Mackie, Ann Dowd, Scoot McNairy). Who wants to be sure ex-presidente Castillo (Joaquim de Almeida, who plays this guy as grumpily “over it”) wins? Follow the money.

But then, Jane may be set up for a fall. Her rival is her longtime nemesis Pat Candy, played with a sinister oiliness by Billy Bob Thornton. His every word reeks of sleazy insincerity, starting with “How ARE you, honey?”

Her candidate is 28 points down in the polls, is arrogant, hates touching people and doesn’t have a smile — he has “a smirk, like George W. Bush.” Nobody likes him.

Jane’s job, once she gets over the Bolivian altitude sickness, is to turn him into a winner, play to his grumpy strengths, and out-dirty-trick Pat Candy’s team.

The big message here is that this isn’t just a “game” to the poor people of Bolivia. Jane may know that “If voting made a difference, they’d make it illegal.” They cannot.

Green, who once had a solid and arty indy cinema career going, cannot for the life of him hit the right tone, here. The film is waterlogged when it should be jaunty, and the cynicism and the sentimentality are kept at arm’s length — as though he’s embarrassed by the campaign-kid about to be disillusioned, or the wily coyote Billy Bob underplays, putting into words what these hired-guns actually think.

The film’s characters are fictionalized creations inspired by the documentary “Our Brand is Crisis,” which was actually about James Carville and others selling their branding/labeling/messaging/character defining wares overseas.  Straughan concocted a star vehicle out of that, full of melodramatic flourishes and painfully awkward asides.

We know where it’s going long before “Brand” reaches its “Crisis.” And we know, as if by memory, that Sandy B. will have nary a hair out of place when we arrive.

MPAA Rating:R for language including some sexual references