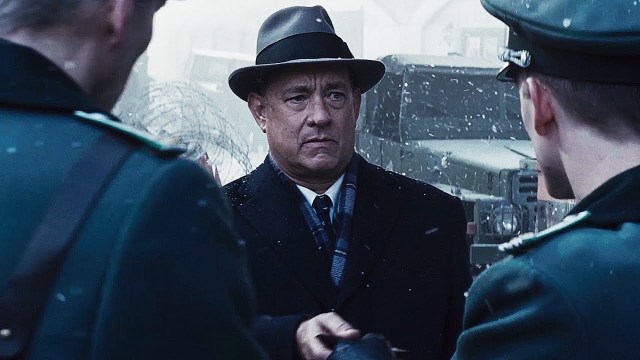 “Bridges of Spies” is a Cold War thriller freighted with all the gravitas that Steven Spielberg and Tom Hanks can give it. Long, patient and chilling, it vividly captures a time in America and the feel of divided Berlin in the muted blues and greys that color our memories of that “duck and cover” age.

But there was always something absurd about the paranoia, the policies and the people in charge on both sides. And leave it to the Coen Brothers, who co-wrote the script, to find that in this true story of a terrifying time.

Mark Rylance, a star of the British stage who only scores character roles in the movies (“The Gunman,” “The Other Boleyn Girl”) adds a laconic, career-defining dash to Rudolf Abel, a quiet, English-accented New York loner and painter nabbed for being a Soviet Spy in 1957.

Hanks does his best Atticus Finch as Jim Donovan, a wily Brooklyn lawyer adept at parsing words in insurance policies, suddenly summoned to be Abel’s defense attorney. We’ve seen Donovan calmly turn opposing counsel in a car accident case inside out over drinks in Manhattan. It turns out he was on the team that prosecuted Nazi war criminals at Nuremberg. He’s a serious man.

But he’s facing a nation on edge over fears of nuclear war, a city calling for Abel’s blood and a judge (Dakin Matthews) determined to give it to them. Even Jim’s wife (Amy Ryan) questions his decision to accept this hopeless case, where the American rule of law will be on trial, with the rules bent to ensure conviction.

“Everyone will hate me,” Jim enthuses, “but at least I’ll lose.”

And lose he does, but not before gaining an appreciation for the “honorable” and stoic way his client carries himself — not surrendering information, not fretting over the electric chair that might await him.

That’s the movie’s one running gag, Abel’s deadpan “What, me worry?” shrug at the huge events spiraling around his actions. 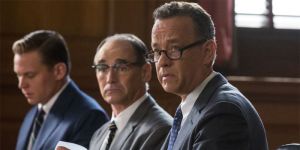 Meanwhile, Francis Gary Powers (Austin Stowell of “Whiplash”) is learning to fly the U-2 spy plane. And if you remember your 1950s-early-60s history, you know how these two tales will connect. Donovan finds himself in wintry East Berlin, a wall going up to separate the city, trying to horse trade with the Soviets (“Let’s keep it simple by calling them Russians.”) and their East German puppets.

The Atticus Finch comparison to Donovan works not just because they are legal men of principle and character, but because of the place Hanks occupies in our moviegoing psyche. He’s this generation’s Gregory Peck, an icon of American values and our sense of decency and fair play.

And Hanks has his finest scenes as he and Spielberg and history take Donovan in over his head, into a ruined city where the rule of law has broken down (he’s mugged, amusingly) dealing with duplicitous, callous vipers who hold life cheap and cannot be trusted. Mikhail Gorevoy and Sebastian Koch ably play Donovan’s foils in this legal wrangle.

The pacing is, at times, too sedate. The script cheats us and Hanks of the big moment where Americanism is explained by the hero, or the hero loses his cool and reminds the East German of the “types” he sent to the noose at Nuremberg 20 years before (I really missed that). And the supporting cast is more capable than star-studded, with Spielberg spending the money on Alan Alda as Donovan’s senior partner but filling every other role with lesser-knowns.

But “Bridge of Spies” is a worthy American answer to the brilliant British “Tinker Tailor Soldier Spy,” a Golden Age of Espionage portrait of the flinty foes facing off across the Iron Curtain that doesn’t sentimentalize them or their times.

With a paranoid, desperate and perhaps simply bored Russia re-starting the Cold War, Spielberg & Co. do yeoman’s service in reminding us of the stakes and the Russians of how ugly being on the wrong side of history looks, in retrospect.

MPAA Rating: PG-13 for some violence and brief strong language