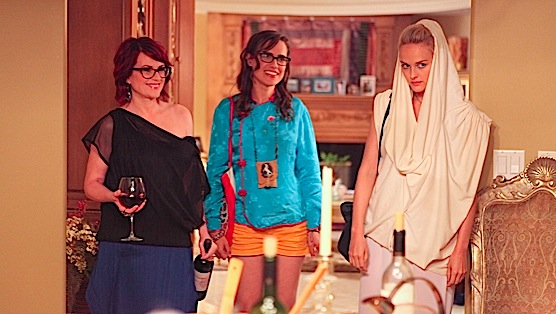 The time-honored actor/actress tradition of “if Hollywood won’t hire me, I’ll make work for myself” is the origin story of “Apartment Troubles,” a nearly laughless comedy that doesn’t do its writer/director/stars any favors.
But cute character comics Jennifer Prediger (“Life of Crime”) and Jess Weixler (“The Disappearance of Eleanor Rigby”) convinced Jeffrey Tambor, Will Forte and Megan Mullally to come on board their “Two Broke Eccentric Girls” farce, so that’s something.
Nicole (Weixler) is a wildly unstable artist who never sells anything, and Olivia (Prediger) is an actress who never acts.
The landlord of their slovenly-kept illegal sublet (Tambor) has had enough. When he ducks in to avail himself of their shower, he realizes their power has been turned off.
“We’re choosing to live without electricity!”
There’s no food?
“We’re on a CLEANSE right now!”
Since those are the film’s funniest lines, you can guess it’s all downhill from there. Absurdly unlikely events put these two paupers on a private jet from New York to L.A., into a car for a “lift” driven by a loony-perv played by Forte and into the home of a rich reality TV producer/aunt (Mullally).
A vapid, tired riff on LA via a dinner party — You’re an artist? What do you do? “I’m working with a lot of SAND right now.” — a broad and brief TV talent show goof, and they’re done. As are we. It’s over so quickly, yet the pity is it wasn’t more quickly.