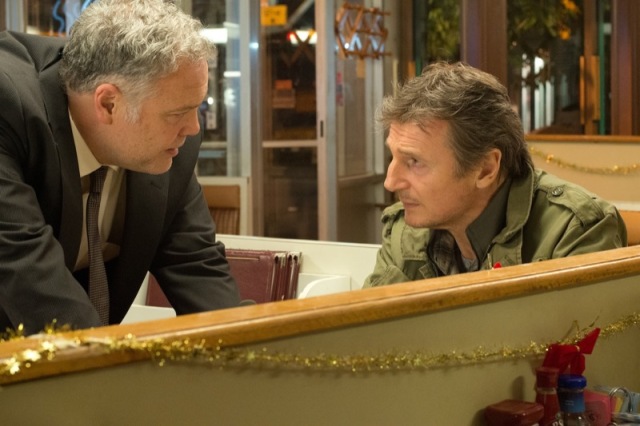 “Run All Night” is a first-person shooter thriller for the Just for  Men/Grecian Formula generation.
Old men — cops and mobsters — sit in bars, drink their Scotch on the rocks and talk about the “old neighborhood,” their long history and the blood they’ve spilled. And then they spill some more — stabbings, beatings that end in strangulation, and shootings. Lots and lots of shootings.
It makes a fine vehicle for those weather-worn beauties Liam Neeson, as an alcoholic retired hit man, and Ed Harris as his friend, his boss, his brother-in-arms.
Sean (Harris) looks after Jimmy (Neeson). Back in the day, Jimmy’s nickname was “Jimmy the Gravedigger.” He solved problems for Sean. They’ve shared secrets and history, and a body count. Their afterlife fates are sealed, and joined.
“Wherever we’re going,” Sean re-assures Jimmy, “when we cross that line, we’re crossing it together.”
But Sean’s hothead son (Boyd Holbrook of “A Walk Among the Tombstones”) makes a deadly mistake, and Jimmy’s estranged limo driver son, Michael (Joel Kinnaman of “Robocop”) witnesses it. Jimmy kills Sean’s kid to protect his own, and it’s game on. Over one long night, Jimmy tries to keep his tough, mob-hating son alive, and Sean sends his minions out to do them both in.
Neeson is very much in his latter career comfort zone with this brutal, brooding thriller. This is his third film with director Jaume Collet-Serra (“Unknown,” “Non-Stop”), and it’s a stylish series of set-pieces that are like a series of heavyweight bouts.
There’s the Brawl in the Bathroom, the Bloodbath in the Bar, the Assassination in the Apartment and the Table Leg Light Sabre Duel in the Tower. Throw in some well-worn New York locations, a visceral car chase and you’ve got something above your standard Neeson thriller.
The script is loaded with cliches — mobsters threatening “LOOK at me,” a mob boss too principled to move heroin, a veteran Jimmy-chasing cop (Vincent D’Onofrio) trash-talking Jimmy.
Common shows up as another cliche, that hit-man hired to hit a hit man. But he’s as menacing as the rest of this stellar cast.
There are plenty of pleasures in watching these old pros — Harris and Neeson, D’Onofrio, Nick Nolte and Bruce McGill — playing old men of the mob wars trying to summon a young man’s bravado for the dirty job each must do.
“Run All Night” doesn’t re-imagine a worn out genre so much as drop a quart of Marvel Mystery Oil into the crankcase of that vintage V-8 for one last ride through the Mean Streets before “crossing that line” to the eternal damnation most everybody in this story has earned.

MPAA Rating: R for strong violence, language including sexual references, and some drug use