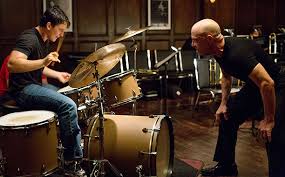 We only hear about them if there’s video or audio — coaches, mostly — a Bobby Knight, grabbing and choking players, a Mike Rice, hurling basketballs and the foulest abuse at a recruit.
We hear the rationalizations, shake our heads and watch the court of public opinion take them down.
Terrence Fletcher is Bobby Knight with a baton, the tyrant of the jazz band program at New York’s prestigious Shaffer Conservatory. A mercurial bully, he charms and flatters only so he can tear down those he charms and flatters — trumpeters and ‘bones players, bassists and drummers — with the ugliest vulgarity and cruelty you could imagine.
And playing him, deftly delivering the bipolar changes in mood, tone and volume, the great character actor J.K. Simmons will give you “Whiplash.”
“Whiplash” is about that band bully and his latest target, a drummer so driven to be among the jazz greats that he will play until the blood spatters from his raw hands all over his drum kit. Miles Teller, of “The Spectacular Now,” establishes his drumming bonafides in an opening practice scene. He can play. And for the rest of this film, Teller holds his own with Simmons in a jaw-dropping battle of wills, a musical descent into madness, all in pursuit of perfection.
” You know who I am?” is Fletcher’s introduction to Andrew (Teller). Fletcher skulks outside rehearsal rooms for the underclass bands, his menacing shadow glimpsed through the frosted glass on the door.
“You know I’m looking for players?”
Andrew grins and nods. But there’s an edge to the meeting, an insincerity to the flattery and the threat of what is to come in the way Fletcher tricks and tests the kid, hitting him with “Then why did you stop playing?” Followed by “Did I TELL you to start playing?”
Expanded from a short film by screenwriter (“Grand Piano”) turned writer-director Damien Chazelle, “Whiplash” gives us sweaty, nerve-wracking rehearsals of classic big band charts — “Caravan,” for instance — and “Whiplash,” the title tune.
All the young players are on edge. A lost set of charts makes this highly strung bassist or that fearful drummer flip out. Because they know the manipulative, volcanic Fletcher will flip out. Andrew is slow to catch on that he’s been brought in as an alternate to scare and intimidate the lead drummer. Fletcher kicks people out, just to send a message. He conducts instant, mid-rehearsal witch hunts to figure out who is out of tune. He throws things, and not lightweight things either.
And he is toughest on drummers. Before “Whiplash” is through, he will have worn out three of them, shouting out which bar he wants to hear, cutting them off a couple of beats into it — “Double time swing. Faster. FASTER.” He insults them, time and again, with a quiet, disappointed “NOT my tempo.”
Andrew’s failed-writer/wife-left-him dad (Paul Reiser) is supportive. But that will be used against him. The kid tries for normality, pursuing the cute candy counter girl (Melissa Benoist) at the Manhattan revival house movie theater he frequents with his movie-buff dad. How will she fit in with the sado-masochistic thing going on every day at rehearsal?
Chazelle ups the tempo and the tension of scenes with quick cuts and extreme close-ups — reeds wetted, spit valves emptied, drumheads tuned. He never lets any musician give comfort or advice any other musician. This is as paranoid and cutthroat a world as the movies have ever seen, and Andrew, the “squeaker” (new guy) is just another bone for Fletcher to chew.
The script and Simmons, known for TV’s “The Closer” and as tantrum-tossing editor J. Jonah Jameson in “Spider-Man,” make Fletcher a monster, and then look for ways of explaining him. We see a sentimental side, his genial public face. Simmons is a charmer, which is why he gets to do those folksy insurance commercials on TV. But “Whiplash” teaches us never to trust him again.
It’s a great performance, and Teller, in a performance just as intense, gives us the faintest hope that this kid will grow the callouses to withstand the beatdowns. If his craving for approval doesn’t drive him mad first.