Movie Review: “This is Where I Leave You” 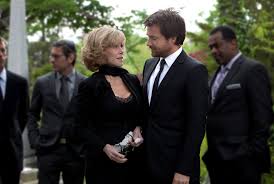 “This is Where I Leave You” is a big, broad dysfunctional family comedy, sort of a “Parenthood” pushed into R-rated “Adulthood” territory.
Jonathan Tropper has turned his novel into a script that becomes the quintessential Shawn “Date Night”/”The Internship” Levy comedy — funny, occasionally touching, sometimes grating, always obvious.
Here’s why you want to see it. This story of unobservant Jews sitting shiva for their newly-deceased dad stars Jason Bateman, Tina Fey, Adam Driver and Corey Stoll as the grumpy siblings and Jane Fonda as their over-sharing child psychotherapist mom. And assorted funny folk from Rose Byrne and Kathryn Hahn to Dax Shepard, Connie Britton and Timothy Olyphant turn up for amusing moments or tiny tastes of pathos.
As casts go, that’s an embarrasment of riches.
This is the story of the Altmans. Judd (Bateman) gets the news about his dad while in the middle of a funk over walking in on his wife having sex with his radio shock-jock boss (Shepard).
Younger brother Phillip (Driver, hilarious) is the spoiled baby of the family, a neer do well who shows up late to the funeral and invites his older, richer psycho-therapist girlfriend (Connie Britton) to the festivities.
“No no. We’re just sitting in awkward silence.”
Older brother Paul (Stoll) stayed in town to run the family sporting goods store and marry Judd’s ex-girlfriend (Kathryn Hahn), a woman Paul is trying and failing to get pregnant.
Wendy (Tina Fey) is the sister, the rock, mother of a toddler married to a callous workaholic and a busybody into everybody’s business. Which is bad, because she tends to blurt out secrets, like Judd’s impending divorce.
Mom (Fonda) is the matriarch with newly enhanced breasts, a notorious book that spilled a lot of the childhood foibles of her kids and a few secrets of her own.
With this cast, you know there’s banter. Oh my yes. Characters break off into very theatrical two-and-three person scenes for bickering, slap fights and the like.
Bateman and Fey scrap like siblings who have a lifetime of practice tormenting each other. Wendy badgers Judd to spill the beans about his divorce in the middle of a room crowded with mourners, and things devolve into a whispered, talk-over-one-another snit-fit for the ages.
“I will pinch you,” Judd insists, as Wendy never takes a breath between insisting, insulting arguments. By the time he gets to “I will PUNCH you,” we believe him, and hope it happens soon.
Driver is properly droll and goofy, Fonda as “out there” as ever and Byrne delights as she breathlessly spills her adorable guts to Judd, whom her character has had a crush on since childhood.
It’s a cluttered, messy, manipulative movie, with too many scenes giving away their finish line right from the start, too many jokes telegraphed, too many characters shortchanged in the story.
But the players are on-the-money here, and their interplay is where this flimsy funeral farce leaves you laughing.