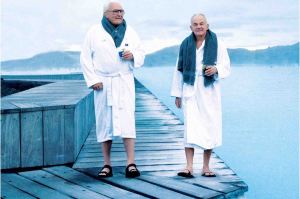 “Land Ho!” is a droll, Icelandic “Odd Couple” — just two slightly mismatched geezers on a sight-seeing/skirt-chasing trek to the island of ice and volcanoes. Its pleasures are slight, but rewarding, if you know where to look for them.
Paul Eenhoorn, of “This is Martin Bonner,” is a depressed retired bank manager whose second wife just ditched him.
Gregarious, drawling Mitch (Earl Lynn Nelson of “Pilgrim Song”) is a New Orleans surgeon, Colin’s ex-brother-in-law and a hale fellow determined to get Colin out of his funk with a vacation. He’s bought them both a trip to Iceland.
“It’s already decided,” Mitch announces. That becomes something like his mantra.
Co-writer/directors Martha Stephens and Aaron Katz, working in a sort of post-mumblecore style, don’t give these two a lot to do or that much to talk about. We get their history together. But Mitch drives the conversations — about women, younger women, famous women and sex.
And Colin plays along with his boorishness, hiding his occasional cringe from the blowhard nice enough to spring for this trip.
Two coeds — one of them a cousin of Mitch’s — show up, and he’s determined to take them out for a five star meal. Here’s my Platinum Card, go buy something nice to wear.
“Looks like you got into Janet Reno’s closet!”
The two 20somethings go clubbing with the two pushing-70s, with unpredictable results. Then they fly off, and Mitch and Colin drive their rented Hummer across the gorgeous Icelandic countryside, from geysers to spas, hot springs to seaside retreats. They eat well, drink a lot and dance on the black volcanic sand of Iceland’s beaches. Sometimes, they bicker.
Forget the Neil Simon analogy — this is “The Trip” with far fewer laughs. But the actors — both of whom have found (indie) stardom late in life — make the seemingly improvised banter feel fresh, even when Mitch is trying too hard, even when Colin is biting his tongue.
One of them has a secret. It’s not much of a secret. One of them has to find his way back to the human race, but it’s not a long trek.
The co-directors pepper the soundtrack with ’80s sync-and-guitar pop (Big Country) or bands that sound like they’re from that era (Monster Party). It adds bubbles to the show, but doesn’t change the essentially deadpan, amusingly banal nature of this journey and the two charming old men who take it.