Posted on February 9, 2017 by rogerinorlando

Those “Fifty Shades” dullards are still flirting, fornicating, breaking up and tying up in “Fifty Shades Darker,” a film which promises “darker” but delivers “funnier” — with some of the laughs intentional.

It’s a soapy sequel, a drinks-in-the-face/masked ball/helicopter crash/melodramatic mediocrity that a better director (James Foley of “Glengarry Glen Ross,” “At Close Range” and “A Perfect Stranger”) can’t lift above laughable.

Meanwhile, English author E.L. James, creator of the ridiculous names Anastasia Steele and Christian Grey, typist of such bon mots as “I don’t know whether to worship at your feet, or spank you,” laughs all the way to the bank.

And yes, Anastasia (Dakota Johnson) opts for “the second option.” Otherwise, there’d be no movie.

That’s an achingly obvious flaw in this S&M female wish-fulfillment fantasy. Anastasia (Ana) has broken off with the uber rich “most eligible bachelor” of Seattle (Jamie Dornan), eschewed the pleasures/pains of his “red room” of torture/teasing delights and started her career. But all he has to do is throw flowers her way and promise “New rules” for their sex-play/relationship, and she’s on her back or on her knees again.

The “Darker” of the title refers to the consequences of Christian’s form of sexual release. One of his former “subs” (submissive to his dominance), a tortured soul played without a hint of pathos by Bella Heathcote, is stalking Ana. His initiator (Kim Basinger) into the world of bondage, whips, etc. is still in his life, warning Ana off, disapproving of her in every way.

And all the poor girl really wants to do is impress her stubbly, hair-flopped-over-one-eye boss (Eric Johnson), the fiction editor at a Seattle publishing house. The novelist James seems to think it daring or telling that Ana would pursue professional ambitions when her celebrated suitor, who shows up everywhere in a convoy of Audis, could just say “It’s been taken care of” to her every want and need.

Give Foley credit for making the sex scenes — ten of them — some actual sexiness. He can’t give the fourth-choice actors cast in the leads chemistry, but he can make their copulation titillating and believable. Johnson isn’t outgrowing her mousy screen presence, but at least she’s mastered her orgasm face. Ben Wa balls, elevator gropes and the like have certainly given her enough practice. 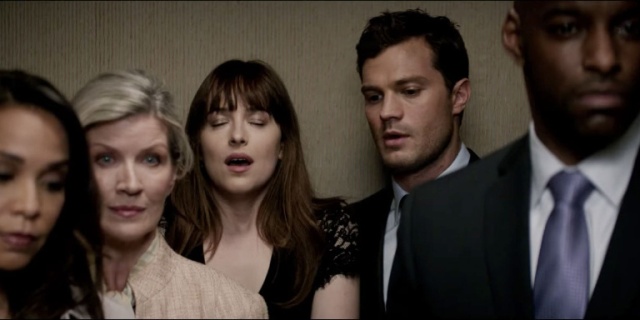 It’s all so opulent, from the penthouse Grey calls home to the family mansion (Marcia Gay Harden is his mother, giving this film two Oscar winners) that spawned him, to the stunning, cavernous apartment that Ana manages on an office assistant’s salary.

And it’s all so decadent and empty, designer duds gained without struggle, “trust” and “win her back with the Big Romantic Gesture” moments with no heart, sex without love.

Worst of all, this two-hour clock watcher that doesn’t really go anywhere is the merely the set-up for a third film, whose title at least promises some relief.