Movie Review: Bus driver/poet finds inspiration all around him in “Paterson” New Jersey

Nothing much happens to the working class poet Adam Driver plays in Jim Jarmusch’s meditative “Paterson,” a drama aptly-set in the New Jersey hometown of poets William Carlos Williams and Allen Ginsburg.

It’s a still-life imagining of a poet’s life — quiet observation, overheard snippets of conversation that inspires writing that the title character, who shares his name with the city, scribbles into notebooks.

Paterson listens to children explaining the life of Paterson boxer Ruben “Hurricane” Carter, spies the various tributes to native son Lou Costello of Abbott & Costello, and wakes up each day with the exotic, unfocused, artistically-minded Laura (Iranian actress Golshifteh Fahrani), who paints everything from her dresses to the shower curtains in their tiny house black and white.

And then he puts pen to paper in his “secret notebook,” musing on a box of Ohio Blue Tip Matches.

“We have plenty of matches in our house,” he begins, weaving that idea into the spark of inspiration about the flame of their love.

His poems (written by a Jarmusch favorite, Ron Padgett) “should belong to the world,” Laura enthuses, before talking up her latest scheme to achieve her dreams of personal expression. She wants to become a country music star, and needs to buy a mail order guitar and lessons.

She may be the true artist in this couple, a mad dreamer heedless of the barriers facing an Iranian finding acceptance in the music of xenophobic America. 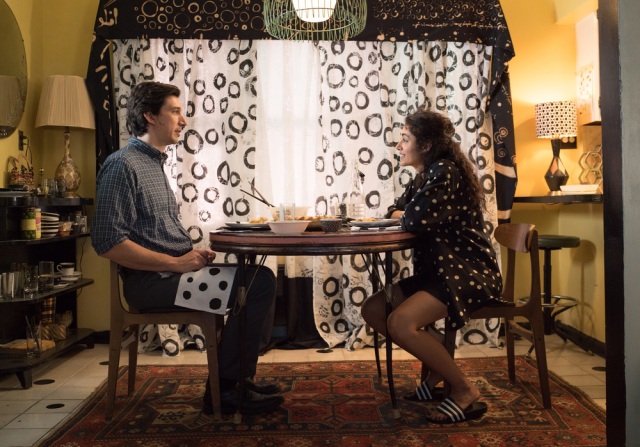 Paterson sneaks a listen to a would-be rapper (Method Man) trying out rhymes to the rhythm of a washer in the local laundromat. He stops and hears out a little girl poet, waiting for her mother, maybe even envies her natural talent. And  he isn’t creepy when he, a stranger, sits with her to listen in rapt awe to her metaphors.

Anybody familiar with Jarmusch’s work will recognize his static style — the muted long conversations, the quiet, the storytelling largely lacking in incident, melodrama or narrative drive. Longtime fans will wonder where the humor is.

Maybe, you figure, the “young bloods” who cheerfully accost Paterson on his nightly dog-walks are going to “dog jack” his bulldog, which they admire.

Maybe he’ll be discovered, or something dramatic and out of the ordinary will happen on the bus, to Laura or perhaps to Paterson himself. Perhaps there’s something in the story of how they met. There are photos of a young man in uniform in their house.

Is that Paterson, or perhaps his twin brother? Twins pops up in conversation and in several scenes, a cryptic bit of Jarmusch arcana for fanatics to ponder and puzzle over.

Yes, there are exotic, un-discovered foreign film talents including a throwback to Jarmusch’s early meditation on Memphis and rock’n roll, “Mystery Train.” Japanese actor Masatoshi Nagase from that film shows up again, as a tourist — this time a poet come to pay homage to the hometown of Williams and Ginsburg.

But I was struck by how dated the film feels, or at least out of its time. It’s something of an aged hipster’s idea how a young poet should be and how to tell that poet’s story. Paterson eschews cell phones as “a leash,” and doesn’t seem to have a TV or even a clock radio (he ostentatiously uses his wristwatch to tell him it’s time to get up). Method Man as a wannabe rapper? Maybe in 1988.

Paterson has built a routine out of a nightly walk with that bulldog to Shades Bar, a somber joint straight out of the 1950s, where the owner/bartender (veteran character actor Barry Shabaka Henley) resists having a TV — the better to overhear the mini melodramas in the chatter of the barflies.

Whatever its charms as a celebration of “the empty page,” of the pauses at the end of poetic phrases which allow the mind to wander into the poet’s head, or in this case — into films similar in tone and tenor — “Tree’s Lounge,” “Factotum,” “Henry Fool” — I was desperate for any hint of Jarmusch’s droll wit, for the humor of “Mystery Train,” “Night on Earth,” “Broken Flowers” or “Coffee and Cigarettes.”

And the omni-present “Girls” alumnus Driver, passively ensconced in this landscape, observing and scribbling without rhyme or the discipline of meter, does nothing  to animate the picture or to give the lie to Jerry Seinfeld’s famous knock on poetry.

MPAA Rating:  R for some language

Credits:Written and directed by Jim Jarmusch. An Amazon Studios release.