Absolutely awful news ends a year full of that, a year stalked by the specter of death.

Carrie Fisher has succumbed to illness and a body ravaged by a lifetime of hard living. She was just 60.

She was never shy about admitting that, and managed to spin her awful years into books and a second breath as one of America’s great wits. “Star Wars” fans aren’t the only ones shocked and saddened by her passing.

I interviewed her a couple of times over the years. She came to Orlando’s hosting of two “Star Wars” “celebration” conventions. She gave off a vibe of good humor and great sportsmanship. All the other films she made, she knew what made her immortal, what would be in all her obituaries. And she was OK with that.

She knew what the fans wanted, and she made sure to give them that. Including this pose, on stage, in Orlando. Shaking my head over this one. So is the rest of the “Star Wars” world.

An icon for recovery, and for being a good sport when fate gives you the gift of that one immortal role. Mom may be “unsinkable,” but Leia Organa was pretty tough, too.

Sixty is way too young to go, even after a life as raw as hers. 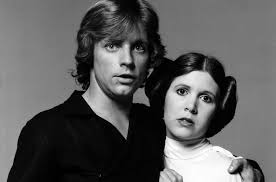 I thought I had got what I wanted under the tree. I didn’t. In spite of so many thoughts and prayers from so many. I am very, very sad.

Dearest Carrie, so incredibly sad to say farewell so soon to such a beautifully honest and unique human being- see you in the multiverse.

Even “Star Trek” mourns her loss.

I’m deeply saddened to learn of the death of Carrie Fisher. I will miss our banterings. A wonderful talent & light has been extinguished.