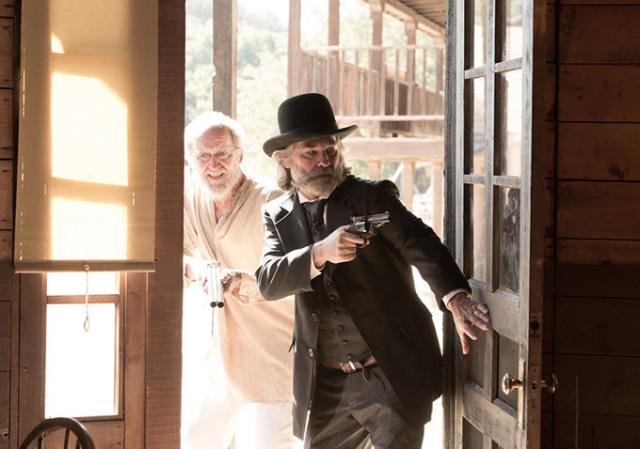 Think of “Bone Tomahawk” as Kurt Russell’s warm-up for his turn as the grizzled Western archetype/anti-hero of Quentin Tarantino’s Christmas gift — “The Hateful 8.”

“Bone” is an unflinchingly-violent and stupidly long genre mashup. It’s Tarantino without all the anachronisms and swearing.

As the grizzled, widowed Sheriff Franklin Hunt, Russell is the reality of this twisted Western. When a couple of townsfolk are abducted, and the “tribe” that took them is described as “troglodytes” by an educated Indian man in their midst, Hunt is the one determined to chase them into the wilderness and under ground, come what may.

And since these natives are primitive and “savage” in every modern sense of the word, since their home turf is “The Valley of the Starving Man,” we have little hope that this version of the classic quest narrative “The Searchers” will have a happy ending.

David Arquette and horror film vet Sid Haig are the bushwhackers whose slaughter of fellow travelers on the trail is interrupted by these ghostly, painted cave dwellers. Arresting Arquette’s Purvis is what draws the evil into town. It gets a deputy and the wife of broken-footed ranch foreman Arthur (Patrick Wilson) kidnapped. Arthur and the Sheriff are the only two locals guaranteed to risk life and limb (literally) to get them back.

Richard Jenkins gets perhaps his one and only shot at a Western as the not-as-slow-as-he-seems “assistant deputy,” Chicory, a guy with an eye for unsavory characters.

“It is the opinion of the assistant deputy that his manner was suspicious.”

Matthew Fox is the other archetype in this posse, the secretive, dangerous and dapper gambler/gunslinger.

“You make a flirtatious remark in my wife’s presence, there’ll be a reckoning,” Arthur warns him.

“I’m the most intelligent man I know,” he says, “and I intend to keep us alive.”

The dialogue crackles with “True Grit.”

Sheriff Hunter — “You make a hasty move, I’ll put a bullet in you.”

Chicory, on spying the pan-flat desert in front of them — “I know the world’s supposed to be round, but I’m not so sure about this part.” 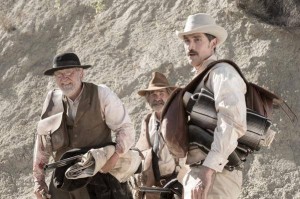 It’s never more than the genre-mashup it sets out to be. And truthfully, the presence of Sid Haig in that grisly opening scene sets us up for an ending we see coming two hours before it belatedly arrives. But “Bone Tomahawk” is a solid B-movie with just enough Tarantino trappings to whet the appetite before the “Hateful” main course shows up on Christmas.