Posted on October 5, 2015 by rogerinorlando 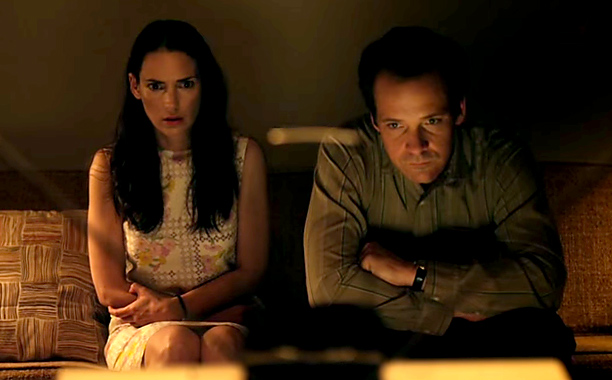 Stanley Milgram explored why so many underlings and ordinary citizens of the Nazi regime might have willingly, or reluctantly, “just followed orders” in carrying out the Holocaust. His “Obedience Experiment” became one of the most influential psychological trials in history. His later “Lost Letter” experiment was almost as famous.

He’s the guy who decided that “it’s a small world, after all,” we’re closer to each other than we realize, and came up with the idea of “Six Degrees of Separation,” years before anybody’d ever heard of Kevin Bacon.

And in his time, he was dismissed as “cruel” and unethical and heartless for his studies, denied tenure at Harvard — misunderstood.

“Experimenter” is a brisk, narrowly-focused but playful account of his life and work, mainly built around that early ’60s test of “How far do you think they’ll go?”

Peter Sarsgaard is Milgram, a methodical man driven to wonder about institutionalized evil and human deference to authority.

“How was genocide administered so purposefully and efficiently?” he wanted to know. A whole nation or race cannot have forgotten the basic Western version of right and wrong. Milgram, as “Experimenter” shows, was greatly influenced by the early 1960s war crime trial of Nazi mastermind Adolf Eichmann, a self-described “ordinary man” whom historian Hannah Arendt would paint as the personification of “the banality of evil.”

Milgram carefully set up his test, cast about for subjects and sent an assistant, dressed in a lab coat, to administer it. One person (Jim Gaffigan) would be the one “tested,” or so the real subjects thought, in a “teaching experiment,” or so they were told. He was wired up to electrodes that would give him a shock every time he gave the incorrect answer in a series of memory tests.

The other person, the real subject (John Leguizamo, Anthony Edwards, Anton Yelchin) would administer the test — and the shocks, which they had no way of knowing were not real.

The voltage would rise, the subjects would twitch and protest, laugh nervously or, on occasion, refuse to continue. How “far” into this test would they go?

“Human nature can be studied, but not escaped.”

“Experimenter” reveals the blowback this experiment — where only one third of those participating defied authority (in a lab coat) and refused to hurt a fellow human being — and the impact it had on Milgram’s career. Plainly, there are worse fates than not being given tenure at Harvard, as Milgram soldiered on, breaking new ground and influencing generations of sociologists and psychologists who followed.

Sarsgaard plays this guy close to the vest, not giving away much other than a certain academic bravado and charm when he’s courting his wife (Winona Ryder) or living it up as his work becomes a William Shatner TV movie in the ’70s.

The “playful” comes into Michael Almereyda’s film in its old fashioned cheapness — Hitchcock-era rear projection scenes in cars, Sarsgaard narrating directly to the camera, wearing the worst fake beard this side of “Gettysburg.”

As troubling as the main experiment is, in recreation, this is nothing like the more cruel “Stanford Prison Experiment,” which made it to theaters last summer.

It’s not a dazzler, and it’s hard to make this subject whimsical. Almereyda (he did the Ethan Hawke “Hamlet” some years back) lets things turn soapy as he watches the impact this work and its consequences — fame and infamy — have on a marriage.

But “Experimenter” is a capital example of that prophet-ahead-of-his-time narrative, a movie about a scientist who lived (just) long enough to revel in the fact that he was onto something before everybody else. And that he was right.