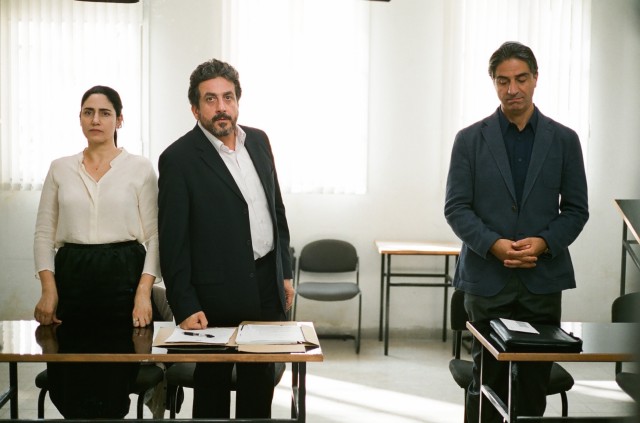 The Kafkaesque nightmare a woman endures trying to get a divorce in a theocracy is played out, in sometimes comical/often excruciating detail in “Gett: The Trail of Viviane Amsalem.”
This Israeli production, in French and Hebrew with English subtitles, puts its heroine through years of trial by rabbis, who all but refuse to hear her pleas and point of view simply because of her sex.
“Know your place, woman,” the Israeli rabbinical triumvirate barks at her. That’s after Viviane, played by co-writer and director Ronit Elkabetz, has dared to speak out in desperation, fear and fury after years of delays and stonewalling by her long-estranged husband, Elisha (Simon Abkarian).
We, of course, have shouted long before then. With every inter-title telling us “two months later” and “three months later,” you want to yell at these sexist pigheaded “judges.”
“Don’t doubt our ability,” they grouse, “granted by both heaven and Earth.”
But we3 do, as does our heroine. Viviane sits and balefully stares at the rabbi brother (Sasson Gabai of “The Band’s Visit”) representing her husband as he questions her character, her nature and the effort she put into a marriage that lasted, she says, 30 unhappy years and produced four children.
Her unobservant lawyer (Menashe Noy) loses his temper, but keeps fighting within the system, as first months and then years go by and Elisha refuses to grant her wish. At every turn, the court claims powerlessness in forcing Elisha to do this. Viviane exhibits the patience of Job as she endures first this tack, then another, from the court and from her husband. Reconcile, bring witnesses who’ve seen the marriage fail, etc.
Since both the court and her husband are working for the husband’s interest, you start to question Viviane’s sanity and piety. Who could stay with a religion that forces a woman to stay in a bad marriage? Who could willingly live in a country where such kangaroo courts exist?
Seriously. And you thought Sharia law was all the women of the liberal West had to fear.
Ronit and her husband Shlomi Elkabetz, in fashioning a sequel to their earlier drama “To Take a Wife,” are slow to reveal the rift that broke the marriage depicted in the  2004 film. But that story, set when the couple lived in Morocco, planted the seeds. He was traditional, and turning more conservative by the day. She strained at the many constraints her religion and her husband’s interpretation of it put on her.
Divorce is rarely “amicable” and rarely pretty, in spite of what people say when the end comes. But the quiet cruelty of a dated system designed to keep women in a form of bondage makes you wonder just how happy the “happiest” marriages in the Holy Land could possibly be. Not with a system this Satanic maintaining them.