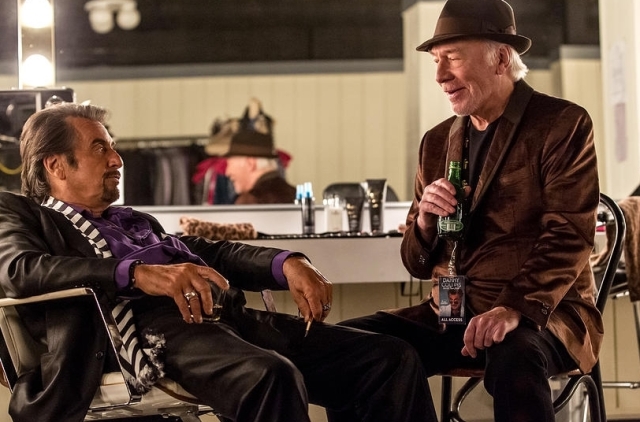 “Danny Collins” may be the closest Al Pacino ever gets to playing Pacino the legend on the big screen.
Perma-tanned under that vast black mane and Mephistophelian goatee, blinged in the Jersey Italian style, effortlessly larger than life and bowl-you-over charming, this is the post “Hoo-Hah” Pacino that he’s presented to the press and the public since “Scent of a Woman.” And he’s never been more engaging at being, well, himself.
Credit actor-turned-director Dan Fogelman for putting the real Pacino into this “kind of based on a true story…a little bit.” “Danny Collins” is about a rich and super-famous singer-songwriter sell-out in the Neil Diamond mold, a guy cruising for decades on hits that the sing-along audience basically performs for him. Then, like the real-life singer we see in the closing credits, he’s gifted with a letter John Lennon once wrote to him back at the beginning of his career, a little advice about “riches” and “fame” that might have served him well…forty years ago.
Danny quits his tour, ditches the “coked-up teenager who can’t keep her nipples covered” (his fiance, played by Katarina Cas) and heads to Jersey to meet the son he never knew.
That son, played by Bobby Cannavale with an exhausted, weary rage that long ago lost its heat, wants nothing to do with him. Nor does his slightly more sympathetic wife (Jennifer Garner, glorious). Their adorable ADHD daughter (Giselle Eisenberg) is another story.
Danny turns on the twinkle for the staff of the Hilton where he’s staying, especially the “age appropriate” manager (Annette Bening in a pasted-on grin that isn’t falling for anything). He sparkles for his “family.” And he drinks, even as he tries to stop sniffing the coke he keeps in the garish crucifix he wears beneath his constantly open shirt wrapped in an omnipresent scarf.
“Danny Collins” is entirely too on-the-nose to be much of a challenge, but it is about something, about taking stock, trying something hard and then wondering if the easy thing that’s gotten you by all these years is what you should go back to.
Bening and Pacino make their “banter” work.
“I’m an old man, with ten Scotches in him. What can I do?”
Fogelman laces the soundtrack with John Lennon songs, gets Christopher Plummer to play the saucy old manager/father confessor to Danny and Josh Peck to play a starstruck doorman. And in this F-bomb laced showbiz dramedy, he makes sure the only F-bombs that matter are from that crusty agent and the saintly “best daughter-in-law ever.”
It’s cute, with an R-rated edge that doesn’t insult the sensibilities of the AARP audience this should appeal to. And the gekko-eyed, leathery grin of Pacino holds it all together, whether it’s croaking Danny’s biggest hit on stage, dancing the “moves” that made the groupies swoon, back in the last century or hinting at the lonely vulnerability of a guy who gets — almost too late — the affirmation from his idol that could have changed his life.