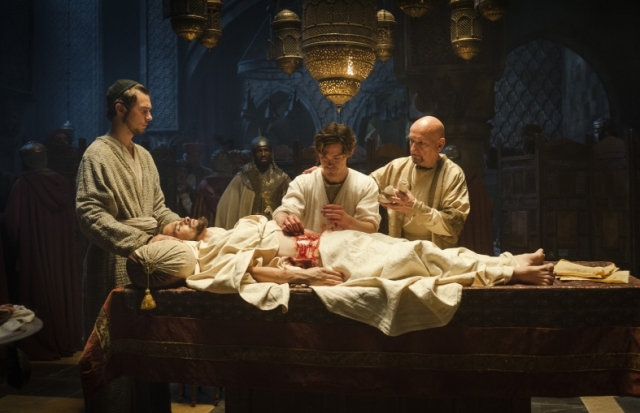 Stories about the modern world’s origins within the Dark Ages have always held a fascination for some — OK, maybe it’s just me. It’s not exactly filmdom’s favorite era, all brown and muddy and unhygienic.
A priest on the run (“The Reckoning”) falls in with a troupe of actors and helps condemn a murderous lord. “The Name of the Rose” and TV’s “Brother Cadfael” had monks investigating crimes, logically and rationally, in a time of superstition. A young Medieval lawyer’s immersion in this new form of provable facts-based law was the foundation of an early Colin Firth gem, “The Advocate.”
“The Physician,” based on a Noah Gordon novel, fits neatly within this historical fiction tradition. It’s about an 11th century English barber’s assistant (Tom Payne) who, upon hearing that real medicine is being practiced and taught in the Islamic East, sets out to study there.
In pre-Norman England, illnesses are referred to as “the sight sickness” (cataracts) or “the side sickness” (appendicitis). The workings of the human body weren’t understood. There were no doctors or surgeons, none outside of the royal courts, anyway. Young Rob loses his mother to illness and takes up with the drunken, wench-chasing traveling barber (Stellan Skarsgard) who failed to save her. The Barber is all about sales pitches, tooth pulling and cauterized amputations.
“Remember boy, the more painful the treatment, the more they respect the Barber!”
But after years on the road with this dissolute healer, sometimes beaten by priest-backed mobs fearing “black magic,” Rob falls into a community of Jews able to treat the Barber’s cataracts. He learns that medicine is only truly taught by the great Ibn Sina (or Avicenna) in far off Persia. Christians aren’t allowed in his madrasah (school). But the world’s wandering Jews are. Rob renounces his religion and sets off for Persia, taking care of that little matter of circumcision along the way.
Ben Kingsley is properly warm and wise as the real-life Ibn Sina, “the greatest healer in the known world,” a studious, scientific man tolerated by the Shah, but not by the Islamic zealots who make up much of the population. In a time of plague, short life-spans and incessant war, Sina taught that “We don’t treat disease. We treat the people who suffer from disease.”
Director Philipp Stölzl and a largely German production beautifully recreate a time of wood, steel, fire and leather. The brown-on-brown art direction extends from the British isles to the sand-dusted Middle East. The costumes of Muslims, Jews and Gentiles are so realistic as to make us feel the scratchy fabrics and smell the unwashed, unchanged leather accessories.
This mini-series length movie is built on an old fashioned framework. There’s a soap opera-style forbidden love with a Jewish girl (Emma Rigby ) promised to an older man, a hint of the supernatural (Rob can feel a patient’s impending death) and an outbreak of plague which tests the physician, his students and the dying city they are all quarantined in.
The film has big, timely themes — health care as a human right, religious fanaticism facing off with science, a plague-induced panic.
Payne makes a decent enough leading man. But it is his supporting cast that lends gravitas to “The Physician.” Kingsley gives Sina the solemnity you’d expect, and an urgency that his decades have taught him to keep from his master, the Shah (Olivier Martinez), a vain ruler capable of glimmers of understanding mixed with ruthless cruelty. Skarsgard’s Barber just swaggers and staggers and twinkles, all to great effect.
The setting and old fashioned structure of the story won’t be to every taste. But “The Physician” is quite good at recreating its era and reminding us that once, long ago, it was the West that was backward and always looking East for enlightenment, education and a way out of the Dark Ages.

Credits: Directed by Philipp Stölzl, written by Jan Berger based on the Noah Gordon novel. A Wrekin Hill release.

2 Responses to Movie Review: “The Physician”