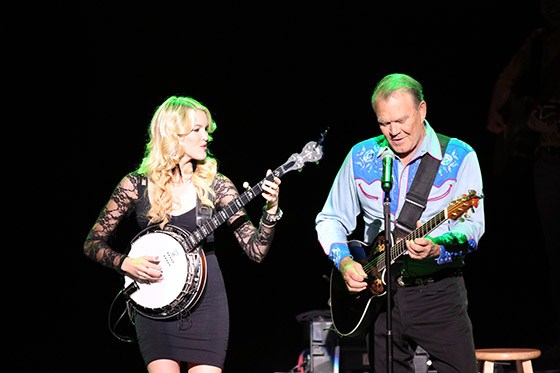 “Cheerful” and “triumphant” aren’t words that come to mind when you think of Alzheimer’s, the debilitating illness that destroys memory, mind and body. But darned if country star Glen Campbell doesn’t manage that in “Glen Campbell: I’ll Be Me.”
It’s a moving documentary that follows him through the last halfway good year or so of his life. He was diagnosed in the spring of 2011. He hit the road later that year, a decision with the potential to tarnish his legacy.
When actor-turned-director James Keach film Campbell and his wife, Kim, on the sofa for a session of home movies viewing, he blurts out “Who IS that?” at every face that pops up.
“That’s you, honey.”
And what’re they’re doing with all these cameras?
“It’s a movie abut you.”
“No kidding!” he grins. Reflexively, a joke comes to mind. “I’ll be me!”
Keach sums up Campbell’s career through clips of his concerts, his old TV show and his guest shots on “The Tonight Show” and interviews scores of performers who put the 70something legend on a pedestal. He follows Campbell from his doctor’s office to the Mayo Clinic. And Keach captures a 100+ date farewell tour that was both a victory lap and an object lesson in the progression of Alzheimer’s.
Those performances — filled with happy accidents, meandering, complaining monologues and still-stunning musicianship, are where the “triumphant” kicks in. He may not be able to remember the names of his three good-looking, musically-adept kids, who play in his band. But for much of this 2011-2012 tour, Campbell was in tune and teleprompter sharp.
Even when that teleprompter tells him, “Glen play a long guitar solo here,” which he reads out, mid-song, he delivers. And tearing through an improvisation on electric or acoustic guitar or battling his banjo-playing daughter Ashley in “Dueling Banjos,” he reminds us that the one-time Beach Boy, one of Hollywood’s greatest session musicians, was a picker par excellence and still is.
His doctor says “the music is the last thing to go.” So even with all the off-camera obsessing over something stuck in his teeth, or names and faces that he’s forgotten, lyrics he cannot recall without prompting and mild tantrums over the memories he’s lost, the shows themselves come off.
Keach’s film relies most heavily on Kim, Campbell’s fourth and final wife, a stunning blond who is Campbell’s voice for the film, explaining the decision to let him tour, the various issues with his illness and its treatment, the symptoms we see onstage and off. The most touching moment comes when Ashley breaks down in tears, testifying with Dad before Congress, trying to get money for more Alzheimer’s research.
But Campbell himself is just inspiring. The public may have wearied of him 30 years ago, a hard-drinking womanizer who never measured up to the corny, wholesome “gee whiz “image, something the film barely mentions. But onstage, laughing at the miscues he doesn’t realize he’s made, losing track of what he’s supposed to be singing or doing, and then getting it back through his firmest memories — his songs — is amazing to see.
The tunes — “Gentle On My Mind,” “Rhinestone Cowboy,” “Try a Little Kindness” — hold up. And from Springsteen to Paisley, The Edge to Sheryl Crow, his peers sit in awe.
Keach wisely saves some surprises for us, ones beyond “The Last Show” and a trip to the studio to record “The Last Song.” Those come from the peers who reveal how their lives have also been touched by the disease.
And through it all, for as long as he can manage it, the Rhinestone Cowboy croons, picks and grins and works the audience, just an old pro putting on a show, the last memory he has to share with us.