Posted on October 21, 2014 by rogerinorlando 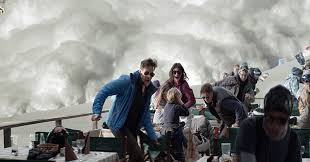 Chilling, cruel and funny — in an icy, Swedish way — “Force Majeure” is a drama about a relationship challenged by an extreme “what would you do if” moment.
Ebba and Tomas, played by Lisa Loven Kongsli and Johannes Kuhnke, and their two small children are enjoying a nice holiday in the French Alps. The kids, being Swedish, are already skiers, though the youngest, Harry, is a bit of a ninny.
We watch them slip into their ski resort routine — up for breakfast, out on the slopes, kids asleep while the parents socialize later in the hot tub or the bar with Americans, Frenchmen and fellow Swedes.
Writer-director Ruben Östlund gives every ski lift ride an air of menace — mostly silent skiers, hanging from a chair in a wall of white. The steep mountainsides are packed with snow, and we and the family learn what those lovely but deadly flashes and booms rippling across the slopes at night are — avalanche prevention cannons.
It’s an austere winter wonderland and cinematographer Fredrik Wenzel makes it look picture postcard pretty. But as Östlund breaks the days down with inter-titles, “Ski Day 2,” and so on, we know something’s coming. All that foreboding and foreshadowing cannot be for nothing.
The “something” is a planned avalanche that hurtles down the slopes, mesmerizing everybody dining on the chilly outdoor patio looking up at the mountains. The wall of snow bears down on them and they freeze. And then it becomes obvious there’s been a miscalculation and the screams and scrambling skiers are covered in a cloud of white.
It’s not that anybody gets hurt, it’s how everyone reacts that is the crux of “Force Majeure.” We see Ebba turn a little cold to Tomas, who is either confused or sheepish. Tensions boil over when she calls him out in front of one and all for running for safety while she gathered up their kids to flee. Dinner dates turn sour. Drinks by the fireplace become accusatory.
Friends take sides and everybody starts to question “What would YOU do if that happened to us?”
“Force Majeure” is the French phrase from the world of insurance and investment means “greater force,” as in no one is responsible when a natural catastrophe or the like is involved in a loss. Is that a good enough excuse for Tomas, that all bets are off and it’s every man for himself when reflexes are involved? Ebba doesn’t think so and even Tomas seems unconvinced as he descends into guilt, grief and depression over failing a very basic manhood test.
But did he?
Östlund’s film wanders as it ponders this stress on a man and a marriage during a vacation that goes on and on, in spite of this alarming near-miss and what it suggests about the relationship.
Like witnesses to an avalanche, we are transfixed by the beauty, power and fury of nature. Like Tomas and Ebba and every other couple Ebba humiliates Tomas in front of, we wonder how we could react, not just to the fight-or-flight moment, but to a loved one’s reactions.
That lets “Force Majeure,” in Swedish, French and English with subtitles, become one of the cinema’s more revealing portraits of manhood and marriage and the slippery slope that a simple reflexive act can send them down.