A film, a famous wag – OK, it was a comic strip character – once said is “a movie we don’t quite understand.”

Thus we come to “Holy Motors,” a trippy celebration of cinema history and an episodic series of bizarre, sometimes comic/ sometimes touching/ often angelic interludes and inside jokes from the filmmaker – Leos Carax. It is, most self-consciously, a “film” above all else. Not a movie.

Framed within the image of an audience watching, mesmerized by the flickering 19th century footage of a nude strong man demonstrating the “lifelike” potential of this new invention – cinema – Carax presents a willfully, maddeningly obscure collection of episodes that hint at a kind of “It’s a Wonderful Life” series of literal and symbolic visitations to the dead or about to die.

A mysterious businessman, Mr. Oscar — played by Denis Lavant, the former circus acrobat whom Carax turned into something of a star with his 1991 film “The Lovers on the Bridge” — says good-bye to his kids, steps into his stretch white Lincoln limo (escorted by body guards in a BMW) and sets out for a day of Paris “appointments.” Those entail him changing clothes and disguises, time and again, as his on-task limo driver (French screen veteran Edith Scob from 1960’s “Eyes Without a Face”) drives him to each meeting in that day’s dossier.

He dons a red mask covered in barbed wire and attempts to assassinate a banker (also played by Levant). He takes on the clothes and stooped walk of a poor old homeless woman – “Nobody loves me, but I’m alive,” she/he thinks in an interior monologue.

Oscar dons fake nails, a red beard and hair and becomes a sewer troll, wandering beneath the streets (where processions of the walking dead – dead-eyed Parisians, pass him with their shopping carts) only to emerge in the tourist trap Pere Lachaise cemetery, where Jim Morrison, among others are buried. The tombstones no longer have names, but jokey exhortations to “visit my site at www…”

That’s where the troll, named Merde (a character from an earlier Carax film), kidnaps a model (Eva Mendes) from a photo shoot, the photographer burbling “Beauty, beauty beauty” at her all the way. 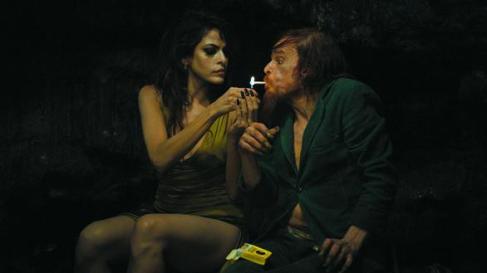 Oscar puts on a motion capture suit and acts out the “future of cinema,” including graphic simulated sex with a blonde contortionist.

And so on. Little is clear and nothing is explained.

Lavant is quite the chameleon here, occasionally earning empathy, amusement or revulsion. It’s a tour de force turn, self-evidently so. Put Jim Carrey in this role and we’d call it “showing off.” Subtitle it in French and actor and director earn the benefit of the barely coherent doubt.

There are pauses for music – Oscar leads an orchestra of accordionists, Eva Mendes and a wistful Kylie Minogue (as a fellow limo-riding “performer”) sing.

The quixotic Carax (“Pola X,” “The Lovers on the Bridge”) doesn’t work much, and seems to be making a commentary on the nature of the passive act of watching, of the changing nature of cinema from the magically organic to the mechanically digital. Read a dozen reviews of “Holy Motors” and you’ll mostly get a dozen people scrambling not to admit that they don’t quite get it.

But think “It’s a Wonderful Life,” listen for Minogue singing “Who were we when we were who were we?” and tumble into the tracking shots, the wild transformations of the singularly homely Levant into assorted grotesque murderers, a dying old man gently scolding a young woman who is condemned “to be you,” and weary angels and try to go with it. It may not change your life or the cinema as we know it, but as indulgent baubles and commentaries on the nature of watching and being watched over (by a filmmaker, or an angel) go, “Holy Motors” hits on enough cylinders to puzzle over for days afterwards.