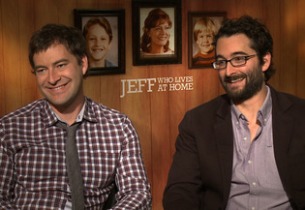 M. Night Shyamalan’s odd sci-fi meets faith thriller “Signs” might seem an odd jumping off point for a comedy about family, relationships and fate. But “odd” tends to show up in conversations when you’re talking with, or about, the filmmaking Duplass Brothers, Jay and Mark.

“Signs” inspired “Jeff, Who Lives at Home,” the latest film from the guys who first gained notice with “The Puffy Chair,” and who broke into the mainstream with their decidedly non-mainstream darkly comic romance, “Cyrus.”

“We hate exposition,” co-writer/director Jay Duplass says. “We wanted to set our main character up in a creative and easy and efficient way. We thought, ‘What better way to define a character than to have him be someone who is obsessed with the movie ‘Signs,’ but who is willing to live his life according to the principles M. Night sets up in that movie.

“We love the idea of Jeff, this average-looking stoner living in his mom’s basement, a guy who has much more going on than you’d think,” says Mark Duplass, his co-writer/director and sometimes actor sibling. “Jeff believes in fate and destiny and that grand things are in store for him.

“That says one thing to us — ‘There’s not an ounce of cynicism or sarcasm to him. That’s the sort of guy we want to travel 90 minutes with.”

That describes their movies, and to some degree, it describes Jay (39) and Mark (35). The most successful proponents of that mini-movement in indie film once labeled “mumblecore,” have been spreading their gospel of low-cost, funny and cutting comedies far and wide — “to everybody we meet at film festivals, for instance,” Mark says. They may be making films with real budgets (“Jeff” is rumored to have cost in the $10 million) with real stars (“Cyrus” had John C. Reilly, Jonah Hill and Oscar winner Marisa Tomei — “Jeff” has Jason Segel, Ed Helms and Oscar winner Susan Sarandon). But their optimism and do-it-cheaper ethos remains.

“Mark and I are grass-is-greener people who are always looking over that hill, hoping that things are going to get better,” Jay Duplass says. “We think there must be some better way of doing this than the way we’re doing it…That’s what we, as filmmakers, go through on a daily basis. We set out to make our movies for a certain price point…We still come from that ‘Puffy Chair’ $15,000 movie ethic where you don’t spend any more money than you need to on a film. The less you spend, the more creative freedom you have.”

Mark, who acts in other director’s films, too, brings that do-it-cheap maxim to every set he’s on. He’s in the first indie film made by Hollywood vet Lawrence Kasdan (“Big Chill,” “French Kiss”) “and for about 95% of the time, it was me, learning from the master,” Mark says. “But every now and then, we’d run into a situation where we didn’t have the money to do something he wanted, and he’d go, ‘You’ve made a movie for $15,000. How do we get this?”

Kasdan says that when “you hire Mark, you bring in that tradition of independent film — a very natural sense of quirkiness, which shows up in all their films and that Mark brought to our film.”

“Quirky” pops up in reviews of most Duplass Brothers films. But they hope, too, that their optimism shines through. “Jeff, Who Lives at Home” may seem like a profile of a scatter-brained wasteoid. As a long day progresses, Jeff’s belief in destiny becomes a help to his brother (Helms), his brother’s wife (Judy Greer), mother (Sarandon) and total strangers.

“Life feels, to us, like kind of a grind,” Jay Duplass says. “It can be difficult. But once every few years, you have that one day when everything comes together and the walls come down and you seem to be making breakthroughs, having conversations with your family that you never could have dreamed of. We wanted to capture a day just like that. In a way, we always want to capture a day like that.”

1 Response to Movie Nation Interview: Love those Duplass Brothers, and they love “Signs”