In the decade-plus since filmmaker James Cameron created Hollywood’s favorite punchline, the world has truly been the man’s oyster. He’s taken cameras underwater to film shipwrecks, and plunged even deeper in his own submersible into Challenger Deep, the deepest spot in the deepest part of the biggest ocean.

Just last month, he presented his findings there at the Deep-Sea Biology Symposium in New Zealand, and is slated to do the same at the American Geophysical Union meeting in San Francisco in a few days.

He’s announced a Showtime TV series which he’ll produce about global climate change. “The Years of Living Dangerously” will feature famous eco-friendly actors interviewing local people dealing with the consequences of climate change in their part of the world. 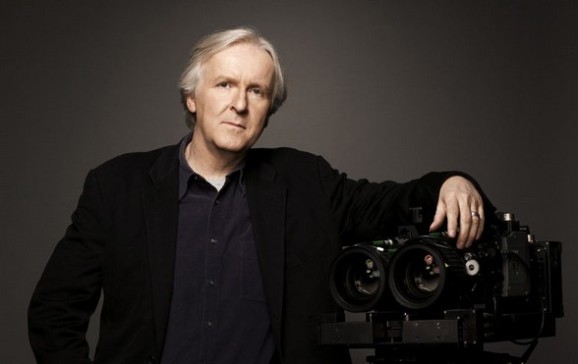 What does the man do for fun? Maybe produce a 3D film based on the big, Las Vegas-based “worlds” of the acrobatic theater troupe, Cirque du Soleil.

“Executive producer AND camera operator,” he says from his farm in the Wairarapa Valley, on New Zealand’s North Island. He shot much of what you see on the 3D screen in “Cirque du Soleil: Worlds Away.” (Review of “Worlds Away” is here)

“I deferred to the director (“Narnia” vet Andrew Adamson) on everything creative. He had the hard job, and I got to have all the fun. I was strapping on a body harness and hanging from the rafters 30 feet above the stage, catching these performers flying around on wires, or up on the big wheel of death in ‘Ka.’ That’s my idea of good clean fun.”

The engineer’s son and college physics major in Cameron has always dug the technology of movies, the more complicated the better. But he says the first time he saw a Cirque show – “Allegria” – he was enchanted by the marriage of talent and technology, and intrigued by the cinematic possibilities.

“They celebrate basic human performance, a great artist standing in the spotlight doing some impossible bit of juggling,” such as what you see in such Vegas-based shows as “Mystere,” “O,” Zarkama” and “Ka.” “You know nobody else in the world could do that. And then a minute later, they’ll have an 80 foot tall stage rising in the middle of the proscenium, awe inspiring technical staging. It’s astonishing what they can do when they’re in a permanent theater and can build things into it.”

With “World’s Away,” Cameron & Co. wanted to “bring Vegas acts that kids rarely get to see, right to them, for the price of a 3D movie ticket.” A noble enterprise, to be sure, as have been his various deep sea adventures and documentaries. But is this any way for the most successful movie maker of our times to be spending his prime filmmaking years (He’s 58)? When film scholar David Thomson all but-wrote-Cameron off in his “Biographical Dictionary of Film” for “living like a king, doodling bit with his fondness for dead ships” and deep sea exploration, was he right?

Certainly not. Now that he’s set up residence in New Zealand, he’s become a big fan of that island nation’s movie making icon, Peter Jackson, and is telling one and all how stunning “The Hobbit” looks at this new faster-frame-rate digital technology. For almost a century, movies have shot and projected images that flicker by at 24 frames per second. “Hobbit” is the first mainstream release to double that.

“You can WALK into the screen and LIVE in Middle Earth,” Cameron crows. While he himself has been testing higher-speed shooting and projecting, “Peter’s the one who took the leap and made a movie that way.” And that helps Cameron, who has this “Avatar” sequel he is putting into theaters, perhaps as early as late 2013. And while he won’t call the “Hobbitt” filmmaker his guinea pig, “we are looking to see if audiences accept that before we go out and up our game for ‘Avatar II.’”