Posted on January 7, 2013 by rogerinorlando

There’s always been something that screamed “CARTOON” about that potty-mouthed pixie, Sarah Silverman. Even at her most outrageous, the edgy comic’s disarming, Betty Boop by way of Betty Rubble voice intentionally softens that edge.

Silverman’s demeanor and material, in which as the Los Angeles Times and many others have proclaimed “almost nothing’s off limits” — race, religion, sex and celebrity — can be jaw-dropping. Think of her stand-up documentary “Jesus is Magic,” her sexualized political ads and what she once sang to ex-boyfriend Jimmy Kimmel that she was doing to Matt Damon.

But coming from a voice built for babytalk, with a touch of phone sex, she gets away with it.

Her most outrageous stunt yet may be her first-ever turn as an animated character in a Disney film. She’s voiced more adult animation — “The Simpsons,” “Family Guy,” “Futurama,” “Bob’s Burgers.” “Wreck-It Ralph” is a Disney toon (review here) in which she plays a sassy, sugary exiled video game imp named Vanellope Von Schweetz. And if Vanellope has a certain Silverman edge, the comic-turned-actress says that’s Disney’s doing.

We reached her in Los Angeles. 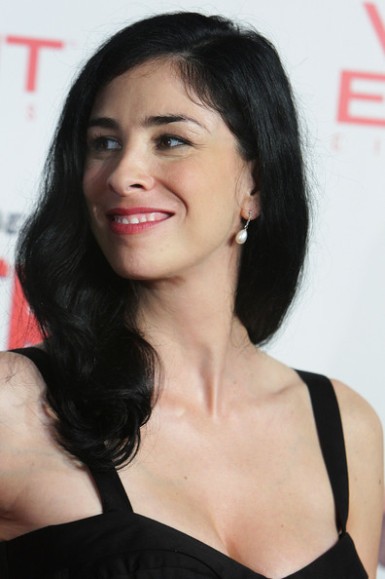 Q: So, who called whom? Did you approach Disney, or did they pitch you?

Silverman: “Disney called me. They did. I have NO idea why. I was like, ‘Do they only know me from ‘Monk’ or ‘Yo Gabba Gabba’ or something?

“I was thrilled. Everybody loves Disney and Pixar. And when I thought of it, the filthiest comedian working as I was coming up was Eddie Murphy. And he’s found a home with Disney. So if he can do it, why not me?

“I mean, I have the perfect voice for animation, and a great face for radio! Haha! I’ve always had a voice, a pretty distinctive one — pleasing or displeasing, depending on who you are. When I hear it, I’m like ‘Eeeewwww, it’s so NASAL.’ But early on, I got a voice-over agent, and I’d go to voice-over auditions constantly — commercials. I never got booked. NEVER. Then, people started hiring me for me and I started getting all this cartoon work

“A lot of people are asking me about this choice, and I’m like, ‘Do you think I’m going to sneak (expletitive deleted) into their cartoon? NO. I’m an adult. There’s more than one side of me and I can certainly curb myself if they give me a script. Come on!”

Q: Well, you’ve provided so little evidence, up to now, that you are, in fact, able to curb yourself.

Silverman: “Yeah, I know. Disney’s REALLY smart releasing this in an election year when I’m at my most tippy-top polarizing self! But they’re still cool about it.”

Q: Anything about Vanellope that you could identify with, as a character?

Silverman: “I feel so close to her. Yes, she’s a ‘Her.’ She’s an EveryWoman — obnoxious and precocious and annoying, at first. She’s this little tough girl. When people are tough, it’s because they’re protecting this fragile interior. She was this little rejected girl covering it with being a tough guy. A lot of people can relate to that. I know I could.

Q: And there are these Sarah Silverman touches to her lines. A video game character with a learning disorder, she says she has ‘pixlexia?’

Silverman: “I LOVE that! I’d love to take credit for it, but that’s in the script. We improvised and came up with alternative lines. ‘Milk My Duds.’ But stuff like ‘Why did the hero flush the toilet?’ ‘Cuz it was hit DUTY’? Straight out of the script. And I LOVED it.”

Q: So is ‘Going Disney the sign that this the beginning of a mellower Sarah Silverman? (She turned 42 in December).

Silverman: “This comes out sandwiched between a filthy political video, and a movie (“Take This Waltz”) that I’m nude in (review here). So SURE. I’m getting a LOT mellower.

“I’m kind of daydreaming, right now. I’m doing another stand-up special. It’s been seven years, and I’m focusing on that after ALL these interviews Disney makes you do — a world tour — ‘Wreck-It Ralph’ mania. That, and getting people to vote.