Movie Review: “Tommy’s Honour” is a bit too much like golf itself — slooooow

A vivid recreation of the early history of professional golf is the principle pleasure of “Tommy’s Honour,” a stately, slow and distressingly dull biography of 19th century Scottish golf hero Tom Morris.

The film was directed by actor-turned-director Jason Connery, son of Sean, a man known for his turn at James Bond and his infatuation with the links. So the son knows a little something about the lay of the land — legendary Scots golf courses.

That’s where Tom Morris learned his game. But we’ll call him Tommy (Jack Lowden), because Tom Morris the elder (the great character actor Peter Mullan) was something of a legend before his son came along to dominate the early years of professional play and “The Open Championship.”

Tom the Elder was a groundskeeper, the man who laid out courses, designed and built clubs and caddied — for the gentlemen of the various clubs that employed him. He was master of the game, and taught his boy everything he knew.

They played as a pair, taking on all comers for the benefit of the wagering gentlemen, who would then pay them a chunk of their winnings. 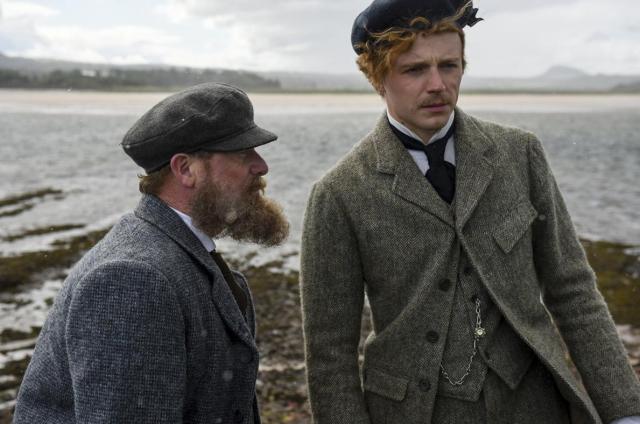 Tommy the lad sees the injustice of this, of playing to benefit “gentlemen who despise me.” “They think they’re better than me,” and when he insists on payment up front, and a whopping share of the winnings, he has his proof.

“Your station in life was set before you were born,” lectures the captain of the club (Sam Neill). “A gentleman you will NEVER be!” The kid can’t even come into the hallowed halls of the clubs where he battles the best of Great Britain in the 1870s. And he’s not having it.

The golf matches, with their primitive clubs, under-groomed greens and scruffy “links course” settings, are fascinating, but mere interruptions for Tommy’s feud with the gents, with his “know your place, son” dad, and with the older woman with a checkered past (Olivia Lovibond) who wins his heart.

The lad’s parents disapprove, until she proves herself. Tommy struggles, battles the gallery with his fists, lets his success go to his head but never loses his sense of “honour,” as the title is both telling and a pun (“honour” is what the golfer who won the last hole earns, the privilege of swinging first).

And the next thing you know, he’s driving his Escalade into a fire hydrant and it all comes to tears. Sorry, I’m mixing up my tales of great golfers laid low.

The performances, save for Neill’s vulpine turn, are perfunctory. The framework — a reporter coming to interview “The Grand Old Man of Golf” — is trite.

Connery doesn’t give the matches any of the “Greatest Game Ever Played” razzamatazz. The script is most interested in the personal story, rising from the working class to show the rich how to play the rich man’s game, personal tests and personal tragedy.

It’s all ever-so-conventional and conservative, utterly predictable even if you haven’t looked up who Tom Morris the Younger was. And with that being the case, there’s no excuse for Connery’s dawdling style of storytelling.

Sometimes, in movies as in golf, you study the shot and fret over the lay. And sometimes, you should just play through.

Credits:Directed by Jason Connery, script by Pamela Marin, based on the Kevin Cook biography. A Roadside Attractions release.