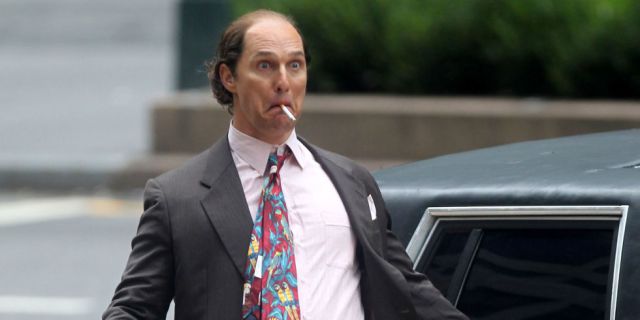 If losing a ton of weight to play an emaciated redneck AIDS patient who resolves to not go quietly into the dark Texas night in “Dallas Buyers’ Club” won Matthew McConaughey an Oscar, what might gaining a pot belly do for him with “Gold,” another “inspired by a true story” tale of greed and big dreams, this time of finding “the Mother Lode?”

Not much, it turns out. “Gold” is a reminder of all those bad movies McConaughey made before “The Lincoln Lawyer” made him a Lincoln pitch man.

He over-reaches. He commits to the part, heart and soul, or seems to. But the character is a cartoon we can’t connect with, the film lacks the spark of life or wit that might have made it work.

In the end, we find ourselves remembering “Sahara” and “Fool’s Gold,” wondering when Kate Hudson will show up. And we ponder what happened to the savvy McConaughey showed in picking and performing the hell out of parts from “”Mud” to “Magic Mike,””Killer Joe” to “True Detective.”

Whatever the virtues of showcasing a movie star as a portly, gauche and balding Nevada “prospector” entrepreneur, seen nude in some scenes, in not-quite-tidy-whiteys in others, Matthew M. signals the depth of his commitment to the part every time his character lights up. Which is almost constantly.

Watch him. The guy doesn’t inhale. He looks like a student actor pretending to smoke. I swear, the one time I see smoke coming out of Kenny Wells’ yellow-toothed mouth it looks digitally added in post-production.

Wells was a fourth-generation Nevada gold miner — a hustler who brags about “dirt under my fingernails” and “diggin’ into the side’a mountains,” but who actually works the phones, charming investors out of their dollars, for his family’s firm.

Washoe Mining Corp of Reno is down to its last dollar, its few remaining employees making calls out of a bar as they scramble to find investors and mine ventures worth investing in, when Kenny gets a whiff of that one, big score.

It’s in Indonesia, where a once-promising mineral geologist (Edgar Ramirez) has lost much of his reputation over the idea that gold deposits lurk all along the rim of the Pacific’s “Ring of Fire,” where tectonic plates collide and volcanoes erupt, earthquakes rattle and tsunamis roar. 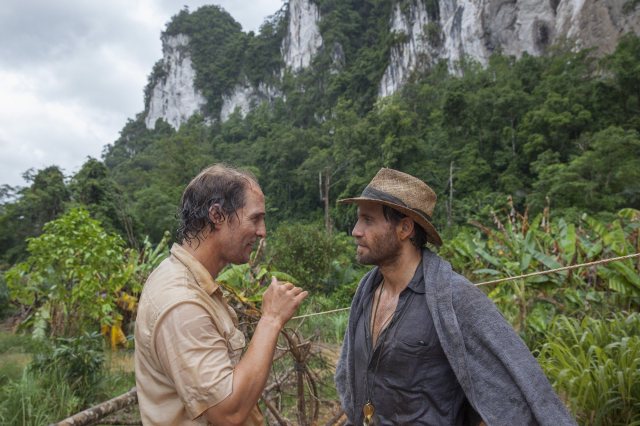 The reluctant, down-on-his-luck Mike Acosta (Ramirez) drags Kenny out into the stunning jungle topography of Indonesia. And together, they find the thing that Kenny and those like him toast with every single bourbon-neat they gulp, from breakfast to bedtime.

And that’s where things get complicated.

Director Stephen Gaghan (“Syriana”) and the script follow Kenny through a downward spiral of corporate conniving (Corey Stoll and Bruce Greenwood plays the connivers), Indonesian treachery and sexual temptation as an increasingly drunken Kenny tries to keep his crumbling “big break” together.

The movie has all these cheap and fake looking “financial report” TV updates delivering exposition about “the biggest gold strike of the decade” (the 1980s). The script uses such groaningly obvious devices as “an interview with Gold Digger Magazine” (a trade publication for gold prospectors that apparently doesn’t exist) to allow Kenny to discuss his gold strike, and an awards banquet, complete with acceptance speech, this “Golden Pick Axe” honor that prospectors give to one of their own who strikes it rich.

McConaughey isn’t allowed to generate much empathy here, as the story is narrated through flashbacks as Kenny is interrogated by the Feds after-the-fact. He never quite gets up to his fast-talking hustler stride — we’ve seen him do this and do it well before. And he’s never larger-than-life, the way McConaughey’s natural instincts make him want to play the man.

Ramirez does the guarded and glamorous geologist thing well. But it’s a compact performance of a character that we need to be, like Kenny, big — engaging.

And Bryce Dallas Howard, given the chance to play an earthy, working class love of Kenny’s life, delivers her usual chilling turn — a beautiful woman who always seems removed, disconnected from the films and the roles she plays.

“Gold” might have had “Oscar bait” on it at some point in its development. But aside from the stunning Indonesian and Nevada scenery — all of which Kenny wants to despoil, by the way — there’s not much to engage us, not much to recommend it.

In the end, you’re left wishing for a film half as good as Kenny’s motto.

“The last card you turn over is the only one that matters.”

MPAA Rating: R for language throughout and some sexuality/nudity