Posted on January 25, 2017 by rogerinorlando 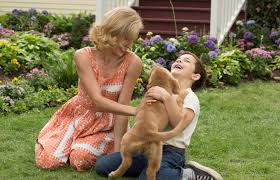 We don’t need a movie, based on a novel, to tell us what “A Dog’s Purpose” is.

It can’t hurt to be gently reminded of these things by a film. But there’s a lot of bleak slipped in between the “Aww” cute closeups of mutts, puppies and AKC-approved purebred pixies in this one.

“A Dog’s Purpose” might more accurately be titled “Six Funerals and a Wedding.” It begins with a feral puppy, promptly picked-up and euthanized by a Michigan dog-catcher.

No, we don’t see that death. But we see many others — and a cat corpse dragged from the grave — in this canine comedy for kids. A dog is shot, others are abused and the only consolation is the story’s insipid insistence on canine reincarnation.

Josh Gad, whose voice proved to be perfect for kid content in “Frozen,” is the friendly, winsome voice of Everydog here, a nascent, naive philosopher who asks the movie’s Big Question — “Why are we here?”

He narrates the story, thinking through the many forms a dog’s life can take in the U.S. — coddled, played with, pampered or tied up in backyards.

His first “life” of consequence is with Ethan, a little boy who is with him from almost-birth until death. Almost. That’s how Bailey, a retriever, sees it.

“Every morning, a big yellow box with wheels took Ethan away from me.”

After Bailey’s too-short life ends, he returns as a police dog who is the only friend of a lonely cop (John Ortiz), then he’s back as a corgi companion to a cute coed (Kirby Howell-Baptiste), and so on.

Filmmaker Lasse Hallstrom of “Chocolat,” “Salmon Fishing in the Yemen” and “What’s Eating Gilbert Grape,” but more tellingly “My Life as a Dog” and “Hachi: A Dog’s Tale,” films this with a lot of extreme and extremely cute puppy close-ups, snippets of the story seen through the dog’s eyes at a dog’s eye level.

The third act is where the biggest name in the cast — Dennis Quaid — makes his appearance, and if you’ve seen the TV commercials, you know his role. 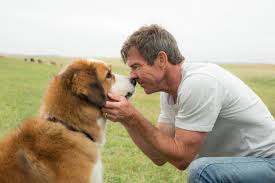 Gad voices gentle narration aimed at capturing how a child, or a dog, might see the melodrama unfolding around him — from love to a prank that turns deadly, to shy owners who relate better to dogs than people, to the alcoholic father (Luke Kirby) whom Ethan, his mom and his dog must cope with.

“Dad always talked too loud when he smelled that way.”

It’s all harmless enough, with the odd lump-in-the-throat moment as another dog meets his or her end. As a lifelong dog owner, I found the going rather grim.

And then there’s the viral video of the dog nearly drowned on the set of “A Dog’s Purpose” that will undoubtedly smother its box office potential. This damning footage should be the death blow in the unholy alliance between Hollywood and the turn-a-blind-eye “No Animals Were Harmed in the Making of this Movie” hypocrisy of the American Humane Association.

We will never know what went on in the decades of dog films — from “Lassie” and “Benji” to “Milo and Otis” — that were shot before every phone was a camera and every traumatic moment on a set could not be documented by one crew member with a conscience.

The last thing “A Dog’s Purpose” needed was something else to cast a pall over it.

But it gets this right. Dogs aren’t with us for long. That’s what they have to teach us, that we have just so many of these moments and we shouldn’t waste them by not being present, or by seeing some sentimental, ethically-compromised Hollywood distillation of them in a movie that never really answers the question posed by its title.

MPAA Rating: PG for thematic elements and some peril

Credits:Directed by Lasse Hallstrom script by Cathryn Michon, based on the W. Bruce Cameron novel. A Universal release.