Movie Review: The horror isn’t just in her head in “Sun Choke” 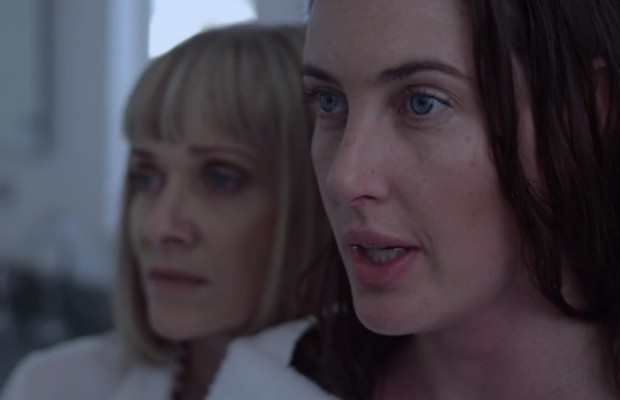 But it’s the sex that seems to be the movie’s reason for being.

Sarah Hagan plays Janie, sort of a helium-voiced Cobie Smulders. She sounds like a parody of a little girl, perhaps because that’s the way her stepmother (horror icon Barbara Crampton, of “Re-Animator”) addresses her.

Janie is disturbed, living in an austere, modernist house with step-mom while dad is away on business. Irma is treating her — for something. But is she a real shrink, using tuning fork prompts to send Janie into flashbacks, yoga to “re-center” her, or just an evil stepmother keeping her charge under control, by electro-shock dog collar if necessary?

The jury’s out on that, because Irma seems dedicated to Janie’s “recovery,” determined to protect her because “There are a lot of ways this world can hurt you” by, among other things, shaving her legs and armpits with a straight razor (nude scene number one). Yet Irma is also willing to give this fragile 20ish woman some leeway. (Wildly illogical moment number one).

That’s where Janie gets into trouble. She spies a beautiful woman in town, follows her, peeks in her window as Savanna (Sara Malahul Lane) has uninhibited sex with her boyfriend. Janie is instantly obsessed.

Irma may not know the particulars. But she knows Janie needs punishing, and new forms of restraint.

“Sun Choke” takes its own sweet time, and then some, getting started. The viewer can ponder the uncanny Cobie resemblance in the leading lady, and grimace at the voice she has shown off since “Freaks & Geeks” in the last millennium. But the possibilities in those static early scenes are many.

Is Irma manipulating Janie to a purpose? Is Janie’s Dad even alive? Is Savanna a figment of her warped imagination?

The last act answers these questions and rather spoils the mystery in the most explicit and bloody ways. But more disappointingly, there’s nothing frightening of even involving in the characters, performances or situations. The movie doesn’t pull us in, squanders the sinister foreshadowing it dabbles with in Act One and resolves itself in abrupt shades of crimson.

In between, there are arty flashbacks and splashes of red that hint at the perils to come. But can we feel their peril when they plainly don’t? When we know, for instance, just how small and weak the batteries are in a dog’s perimeter shock collar?

“Sun Choke” earned rave reviews at a horror film festival back in 2015, which makes you wonder if there was judicious slashing in the editing as well as the film’s gory finale as the movie was prepped for its 2016 theatrical release.

If not, well, there is a cluster of horror film reviewers who just lost their heads at the sight of sexy young women doing sexual things in an otherwise dull horror thriller. To paraphrase the folk tale, it’s not just the actresses who have no clothes. The same could be said of “The Emperor.”