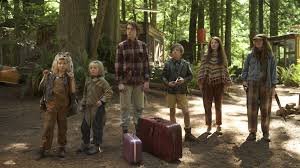 Viggo Mortensen gives perhaps his sweetest performance as a father determined to righteously raise his kids “off the grid” and disconnected from much of society in “Captain Fantastic,” an earthy, funny and sometimes poignant portrait of a family that could only exist in the fantasy of the movies.

Playing a dad left alone to finish what can only be called an “experiment” he started with his wife, he doggedly purses a childrearing philosophy built on utility, backwoods survival skills, Great Books and the philosophy of leftist social critic Noam Chomsky. It’s a “‘Cheaper by the Dozen’ Meets ‘Mosquito Coast'” of idealized kids and idealized “honesty” that wanders in the third act and loses its nerve. But Mortensen gives a subtle, questioning performance in a movie that is fascinating in the details actor turned writer-director Matt Ross conjures up in this First World indulgence of a lifestyle.

We meet Ben Cash (Mortensen) and his brood, camouflaged in mud, stalking and killing a deer with just their wits and a knife in their corner of forest in the Pacific northwest. The middle child (Nicholas Hamilton) does the deep.

The six kids, ranging in age from 5 or 6 to 18, can dress and skin a deer, defend themselves in hand-to-hand combat, both recite and analyze the Bill of Rights and read at a level well beyond their years. They meditate, rock climb, do yoga, sing and play instruments.

Every question is taken seriously and given a serious, honest answer by their (apparent) polymath dad. But Ben’s honesty is put to the test by the news that their mom, who had been off seeking treatment, has died.

“Last night, Mom killed herself. She finally did it. Your mother is dead.”

There is no comforting their grief, which includes weeping and lashing out. And since they all have survival knives — even the tykes — that’s a little scary.

But that is their way. And “Nothing’s going to change,” even as they resolve to take their converted bus/RV “Steve” to New Mexico on “a mission” to battle Mom’s disapproving father (Frank Langella) over her funeral and her legacy — her children.

The comedy in the road trip comes in their encounters with the world they’ve been sheltered from. The children note the obese Average Americans they stumble across in modern civilization and ask, “Are they sick?”

Oldest boy “Bo” (George McKay) can argue Marx and Trotsky, but is hapless and helpless in the presence of pretty teen girls who aren’t his sisters.

The children never really quarrel, though Rellian (Hamilton, with a young Edward Furlong look and haircut) is beginning to revolt. Every moment is “teachable” to Ben. Every insubordination is met with “Make your case to the group,” every hardship a reminder that “There is no cavalry coming to the rescue.” Self-reliance is paramount.

And every misuse of the language corrected.

“Can ‘unique; be modifed?” These kids know the answer, even if almost every TV news or sportscaster and the millions they influence don’t. As a result, the kids are “unique” in their realizing there is no such thing as “most unique” or “more unique.”

Missy Pyle plays the indulgent campground mom whose daughter (Erin Moriarty) is a man-trap in Daisy Dukes and fishnet stockings, at least as far as Bo in concerned.

And Langella portrays a brittle, bitter but still loving grandfather in the inevitable third act battle over values, philosophies and Real World realities that he is sure Ben is hiding from his kids. Everybody shelters their young is Ross’s message. We just do it in different ways.
Ben’s kids can stage a mass shoplifting at a supermarket, poach game when required and stage a marvelous “Jesus Loves Me” farce when a nosy cop is about to discover their dodging truancy laws. Dad has taught them that Christianity is “a dangerous fairytale,” so mockery and using it to get out of a jam with “The Man” is allowed.”Values” are more malleable than some would have us believe.

Ross glosses over much of child-rearing/growing up, and as I said in the outset, loses his nerve in grappling with the consequences of this alternative lifestyle. But Mortensen makes Ben a rational, reasonable tyrant and the kids have just enough edge to seem real, as much as they look like “hippy kids” as photographed for an Old Navy catalog.

And if “Captain Fantastic” seems too fantastic to be as homespun and “real” as some versions of this lifestyle, we’re willing to indulge it, these kids and their Rational Man dad almost as much as he does.